Turn the page on your tastebuds with these awesome cookbooks

Here are our favourite recipe-filled tomes of the year gone by, and the ones we're most looking forward to in 2017 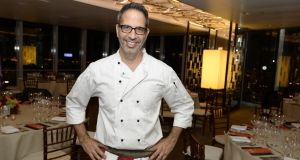 Many of us have marvellous intentions towards all the books we shall read over Christmas but, between running from party to party to peeling spuds and making cranberry sauce, who actually has the time to read over the holidays? Certainly not the cooks, anyway. The quieter pace of January, without the distractions of a bulging social calendar, is much more conducive to carving out a bit of reading time.

From last year’s pile of unread food writing, I’m currently getting stuck in to Rice, Noodle, Fish by Matt Goulding. Published in March 2016, this is an in-depth exploration into the food culture of Japan. The book came about after an email exchange on the unknown complexities of Japanese cuisine between Goulding and Anthony Bourdain, who is the editor at large of Goulding’s travel and food writing website Roads & Kingdoms. The Financial Times pronounced Rice, Noodle, Fish one of their best books of 2016 and it was named travel book of the year by the Society of American Travel Writers. Goulding released a similar approach to Spanish cuisine, entitled Grape, Olive, Pig, at the end of last year as well. Head to the online shop to buy a copy of the book or a cool Japanese inspired tote bag or ramen map on Roads & Kingdoms. Which, incidentally, is great for long reads, too.

The Lucky Peach crew were back with another cookbook last year, this time entitled Power Vegetables! Tubro-charged Recipes for Vegetables with Guts by Peter Meehan. As can be expected with Lucky Peach, it’s an irreverently playful yet heart-warmingly sincere take on vegetables. You should take the opportunity to subscribe to their brilliant magazine, too.

A cookbook that’s on my wish list is Jessica Koslow’s Everything I Want To Eat: Sqirl and the New Californian Cookbook, published last year. Koslow is the award-winning chef behind LA restaurant Sqirl, whose fans include American food legends Alice Waters and David Chang. Described by the New York Times as being at the “intersection of health food and diner food and Michelin-starred kitchen”, Koslow’s food, and her cookbook, seems like a good choice for those looking for the next level of home-cooked modest yet innovative breakfast, lunch and brunch. Sign me up!

One of the best long reads I I bookmarked in 2016 delved into a theme that looks set to make its mark in 2017, and that is the problem of sugar. The Sugar Conspiracy, written by Ian Leslie and published in April of last year on the Guardian, tells the story of John Yudkin, a British professor of nutrition whose book Pure, White and Deadly had put forward the effects of sugar way back in 1972, after which his work was discredited by those with competing agendas. Be prepared to evaluate your sugar intake.

Cookbooks To Come
Looking ahead to what’s coming down the road in terms of cookbooks and food writing this year, How To Eat a Lobster and Other Edible Enigmas Explained by Ashley Blom and illustrated by Lucy Engelman looks like a smart buy. It’s an illustrated book that seeks to demystify some of the trickier or more mysterious aspects of popular eating, serving up answers to 10 food-related questions that you may have been too embarrassed to ask. It’s available to pre-order on Amazon and is set to be released in April 2017. Have a look at Engelman’s website in the meantime for a sample of her illustration work .

A Really Big Lunch is a collection of food writing by New York Times bestselling novelist and poet Jim Harrison, to be released on the one-year anniversary of his death this March. Harrison is probably best known for his novella, including Legends of the Fall. Remember the dreamy 1994 film adaptation with Brad Pitt and Aidan Quinn? Well, you can thank Harrison for that. He was also known for being a roving gourmand and this collection brings together his thoughts on food for the first time. You can pre-order it on Amazon before March.

For those interested in finding out more about the soul of Seoul food, you might like freelance journalist Graham Holliday’s second travel and food book, Eating Korea: Reports on a Culinary Renaissance, a follow up to his 2015 book Eating Vietnam. Holliday has written for the Guradian and Time magazine, and was once Reuters foreign correspondent in Rwanda.

For dessert, we have Yotam Ottolenghi’s newest book to look forward to. Written alongside Helen Goh, it’s to be called Sweet, and it should hit our shelves by September 2017. Photographed by award-winning New York team Peden + Munk, Sweet will share recipes for cakes, cookies, cheesecakes, tarts, pies, puddings, and confectionary from different culinary traditions.

Meet the Bearman of Buncrana: ‘I knew about Joe Exotic for years’
7

Bar soap vs liquid: Which is better for the environment?
Real news has value SUBSCRIBE