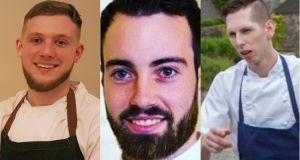 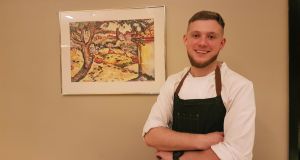 Romuald Bukaty, chef de partie at The Clayton Hotel at Dublin Airport, has reached the semi-final for the second year in a row

Three Irish-based chefs have reached the semi-finals in the international S. Pellegrino young chef 2018 competition. Ten semi-finalists from 21 regions worldwide have been selected from thousands of entries. The competition attracted 30 per cent more applications than last year.

This year, the chefs from Ireland are: Killian Crowley, chef de partie at Aniar in Galway city, whose dish was turbot, kohlrabi and sea purslane.

Michael Tweedie, a chef at The Oak Room, in Adare Manor, Co Limerick has also qualified. Though the hotel has yet to reopen, the kitchen is operating for the chefs planning the new menus and service. Tweedie is in the running with his dish of Duncannon Lobster, ravioli of scallop, lobster and basil, lightly spiced lobster bisque.

The third semi-finalist is Romuald Bukaty, chef de partie at The Clayton Hotel at Dublin Airport with his dish entitled “ Hey, John Dory”. Bukaty was also a semi finalist in the competition in 2016.

Young chefs from 90 countries worldwide submitted entries looking for a chance to be part of the annual talent search for the world’s best young chef. Each chef’s application and signature dish was evaluated by experts at the leading educational and training centre for Italian cuisine, ALMA. Each application was evaluated on the “Five Golden Rules”: ingredients, skill, genius, beauty and message.

From now to December the semi-finalilsts in each region will compete in local challenges. Each region will have a jury composed of independent chefs who will judge the signature dishes. Chefs Angela Hartnett, Alyn Williams, Phil Howard and Mickael Viljanen will form the UK and Ireland jury and the challenge will be held in London at the Waitrose Cookery School on October 4th.

At the end of December, 21 young chefs will be announced as the official finalists and the Grande Finale will be held in June 2018. Each chef will be assigned a mentor chef who will provide them guidance on how to improve their signature dishes and support them in the preparations for the international finals.