The Ivy restaurant to open in Dublin in July 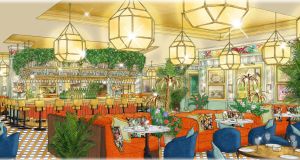 A computer generated view of the interior of The Ivy Dawson Street restaurant, which will open in July.

The Ivy restaurant, the London celebrity hotspot favoured by theatre, art and media personalities, will open a brasserie on Dawson Street in Dublin in July.

Unlike the West End flagship, where prime time reservations are almost impossible to book, unless you are a very regular customer, accessibility will be a feature of the Dublin opening, where a third of the seats will be available to walk-ins, without prior reservation.

“It’s not going to be just a special occasion restaurant. We don’t have a specific demographic in mind, it’s for everybody,” says general manager Jamie Belton, who came to the job from with the Dylan McGrath group of restaurants in Dublin and also previously worked in Fire and Residence.

Belton has brought his senior management team with him, and the project will create 151 new jobs in total. Nick Lentini, who was the launch chef for Jamie’s Italian in Dundrum, has been appointed head chef.

“We have the ability to do a huge menu, and 50 per cent of that menu will be under €20 – and that includes main courses – so very accessible prices,” Belton says. The lunch and early evening menu, which will change every two weeks, will be pitched at €20 for two courses and €25 for three.

The Ivy Dawson Street is part of The Ivy Collection, a diffusion group of restaurants, cafes and brasseries under the same ownership as the original, which last year celebrated its centenary. The Dublin opening is the group’s 27th since 2014, and the first outside the UK.

The all-day dining, brasserie style restaurant will open from 7am for breakfast, with last food orders at 11pm, seven days a week. There will be 150 seats in several distinct areas in the main dining space, plus 24 at the bar, 40 on the south-facing outside terrace and 36 in the Jonathan Swift Room, a private dining space.

“We want people to be comfortable. The menu is quite extensive, there will be something for everyone, so if you want to have a three-course meal you can come in for that, and if you just want a sandwich or a coffee, you can do that also,” says Baton Berisha, operations director for The Ivy Collection.

Berisha has opened all 26 Ivy Collection restaurants for the group, including the strongly performing Chelsea location, which handles 1,000 covers a day. “Within 30 seconds of opening the reservations [for Chelsea], we were booked out for three months,” he says.

The Ivy and The Ivy Collection are owned by Caprice Holdings, which operates a string of high profile restaurants and hospitality outlets across London and the UK, including Scott’s, J Sheeky, Daphne’s and Sexy Fish.

The Ivy Collection restaurants echo many of the original’s Art Deco design features, and The Ivy Soho Brasserie, on which the Martin Brudnizki Design Studio consulted, is the design template for the Dublin opening.

It will feature floor-to-ceiling glass windows, a huge onyx bar, marble and polished parquet flooring and comfortable leather banquettes. An Irish consultant has been hired to source appropriate artworks with a Dublin connection or theme. The toilets are a particularly striking design, described by the Jamie Belton as “unique” and “very Instagramable”.

As with the Soho location, there will be a DJ booth in the restaurant, but the music will be of a “chilled” nature. “We need to create an after dinner drinks atmosphere without being a bar,” says Belton. Tables will be available to book for late night drinks, and the cocktail list is being created by head barman Dan Shanley, previously of Siam Thai in Dundrum.

Head chef Nick Lentini is working with Sean Burbidge, executive chef at The Ivy Collection, to source Irish food suppliers and to inject an Irish feel to the menu, which is described in the UK as featuring “modern British dishes”. The menu will offer snacks, starters, fish and seafood, steaks, vegetarian dishes, side orders, sandwiches and desserts, as well as breakfast, weekend brunch and afternoon tea.

Many of the “comfort food” dishes The Ivy is known for will feature, including the famous shepherd’s pie, made with lamb and beef, and beloved of luminaries including Tracey Emin – who claims to have eaten only that in 20 years of visiting the restaurant – David Walliams and the late Sir Roger Moore.

An Irish whiskey will substitute for Laphroaig in the steak tartare, and an Irish cheese will replace West Country Cheddar in The Ivy hamburger. The menu will be seasonal and will change four times a year.

Food purchasing costs have been found to be higher in Ireland than in the UK, according to Burbidge. “It’s an education, everywhere is different. It’s about seeing who is there and what they can deliver for us and trying to make sure it is sustainable and responsibly sourced. We’re back over in Ireland next week meeting more suppliers.”