That famous Featherblade burger? Here’s how to do it at home

Fakeaway Friday: The perfect bacon cheeseburger is easy to crack with these top tips 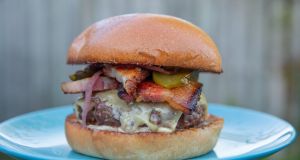 For a brief time, some of the most Instagrammed burgers of the pandemic were available over a wide radius, but as couriers became busier, delivery of Featherblade’s bacon cheeseburger was restricted to Dublin city and county.

The rest of the country could only look on in envy at the juicy beef burger, melting mature Cheddar cheese, and that famously thick slab of  caramelised smoked bacon, topped with bright pink pickled onions.

The Dawson Street steak restaurant’s takeaway kit earned a 9/10 score from Irish Times restaurant critic Corinna Hardgrave, who described the burgers as being “stupendously good,” with “deep, savoury, meaty beefiness with a hint of smoke coming through.”

So what makes these burgers so special, and can they be replicated at home, without the kit? Aaron Fitzpatrick, head chef at Featherblade, shares some of the secrets of his creation. “In my opinion, to create the perfect burger, you need to use a combination of meat cuts.” The Featherblade patty has applewood-smoked brisket, aged striploin and a little chuck beef and suet.

“Most burgers will have an 80 lean meat to 20 fatty meat ratio. Using a little bit more fat than this really makes a big difference. Grass-fed beef is also much better to use in a burger, as it has so many more layers of flavour than corn fed beef. The grind of the mince is also very important. For the perfect burger I would always use a medium grind.”

The Featherblade bacon is smoked in-house. “We order raw pork belly and cure it for 10 days in our own special mix, then sugar coat it for two weeks and then smoke it for six hours over applewood. This results in a sensational sweet and smokey bacon, and when you fry it the sugars caramelise and give it a dark, crunchy outside,” Fitzpatrick says.

A strong mature Cheddar cheese is melted on to the burgers when they are almost cooked, and the whole lot is assembled on a brioche bun. “Brioche is my favourite to use, because it has butter and eggs in it, making it a rich and delicious bake. It also doesn’t get as soggy as some buns do.” Brioche burger buns are available from lots of supermarkets, including Aldi and M&S.

Fitzpatrick recommends constructing the burger with care – burger architecture, he calls it. “If I order a burger and it has a giant toothpick in the middle of it, I know it’s going to be a bit of work to eat, and it really shouldn’t be. I believe putting most of the toppings on the bottom is key. It makes the burger easier to eat, as it’s less messy and there’s less chance of it toppling over.”

Black garlic mayo and pickled onions complete the composition of the burger. Black garlic can be found in bulb and paste form in the Chan Chan range of condiments developed by chef Kwanghi Chan, and available to purchase online. Pink pickled onions are a cinch to make. Just slice red onion into thin half-moons and immerse them in red wine vinegar (into which you have dissolved a little caster sugar, if you don’t like them too sharp), and they’re ready to eat in a couple of hours.

That’s it, the Featherblade bacon cheeseburger, deconstructed. Just make sure to use good quality beef, it’ll make all the difference. If you’d still prefer to have someone else do the work, chef Gráinne O’Keefe’s range of beef burgers for Bujo, as well as vegetarian and vegan burgers, can be ordered for delivery nationwide on Fridays. These sell out fast though so keep an eye on the website for each week’s release.

Here are a few more burgers, from the Irish Times recipe archive, to ring the changes, including Gráinne O’Keefe’s ultimate beef burger with onion rings and rarebit cheese sauce.