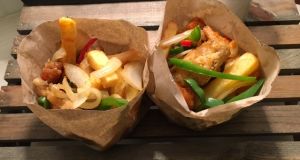 The spice bag has again been voted Ireland’s favourite takeaway dish, in this year’s Just Eat National Takeaway Awards. In this piece from our archive, the Chinese-born, Donegal-raised chef Kwanghi Chan gives his take on the fast-food order

It’s most definitely not a Chinese New Year dish, but the “spice bag” – an Irish snack-food favourite – has become an internet sensation, with Aoife Dooley immortalising it in her “Dublin Hun” illustrations.

According to Dooley, “A spice bag consists of crispy chicken, red and green peppers, chilli peppers, and chips, all seasoned in a bag. If it’s a fancy curry shop, you get it in a box.”

But the spice bag is moving beyond chip shops and Chinese takeways. It’s about to go upmarket – chef Karl Whelan plans to put his interpretation on the menu at his Hang Dai restaurant in Dublin.

The recipe below is enough to make 10 spice bags, so invite your friends for a party or halve the ingredients for a small group.

Method
1. Start by making the braised pork ribs. Cut the ribs between the bones to remove the meat, and cut this into dice (or ask your butcher to do this for you). Place the meat in a large pot and cover with the rice wine vinegar, dark soy sauce and honey. Marinate for an hour in the fridge.

2. Put the meat and the marinade in a pot and add water to cover. Place on a hob over a high heat and bring to the boil. Reduce to a simmer, then add the star anise and cinnamon and the ginger and garlic. (Put the ginger and garlic in a plastic bag and smash them gently with a rolling pin before adding to the pot, as this will release more flavour than chopping.)

3. Gently simmer on the hob for one and a half to two hours, until the pork is tender, or you can do this in the oven at 165 degrees/gas 3.

4. Place the chicken wings in the beaten egg with the star anise and lemon juice, then fork them out of the egg mixture into the potato flour. Shake off any excess and let them rest for five minutes. Deep-fry in the oil at 180 degrees for six minutes, until crispy and cooked. Remove from the oil, drain on kitchen paper and keep them warm.

6. Preheat a deep fat fryer and cook the chips until crisp. Drain them on paper towel and keep warm.

7. Combine the ingredients for the special seasoning mix. Drizzle rapeseed oil in a large wok over a low heat , and fry the shallot and peppers, making sure they are not too crowded (you may need to use two woks, or cook the vegetables in batches). Add half of the seasoning to the vegetables and mix through.

8. Throw in all the glazed rib meat, chicken wings and chips and toss in the wok. Add more of the seasoning, to taste, and keep tossing.

9. Spoon everything into paper bags, add slices of red chilli to each bag, and serve hot.

Life as a carer: When a child’s diagnosis means ‘a disease for life’
10