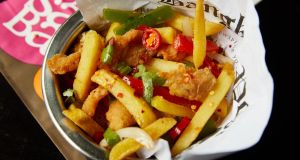 Ireland’s top takeaways 2020: a spice bag from Saba to Go

Saba to Go in Rathmines, in south Dublin, has been named Ireland’s favourite takeaway in the sixth annual Just Eat National Takeaway Awards.

Camile Thai in Greystones, in Co Wicklow, won one of several new categories at the awards on Tuesday night, for best vegan takeaway. Camile Thai in Phibsborough, in north Dublin, won the sustainability category, another new prize.

In the midst of the fancy kids on the block, best breakfast takeaway was won by McDonald’s in Swords, in north Co Dublin.

Spicebag: how to make
one at home

More than 17,000 people have voted in the awards over the past few weeks, according to Just Eat, the food-ordering and delivery app, suggesting that January takeaway diners like what they’re ordering – or even just the idea of it, as voting was open to everybody, not just takeaway customers.

The winners come from across Ireland. Shapla Indian, in Carlow, won the award for Leinster’s best takeaway; Xian Street Food, in Galway, won in Connacht; Camile Thai in Limerick won in Munster; and Bamboo Court, in Letterkenny, won in Ulster. Saba to Go was also voted best takeaway and best Thai takeaway in Dublin.

The awards were presented at the Twenty Two venue in Dublin this evening.

HPV vaccine: A complete guide to immunising daughters and sons
6

Looking for a new frock? Here's why you should rent, not buy
8