So you think you hate moussaka? Try the Ottolenghi version

Yotam Ottolenghi’s perfect moussaka, plus some wines to match its assertive flavours 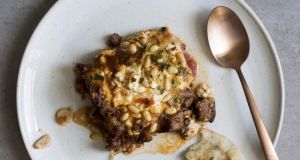 It’s a fine line, when you cook, between success and failure. I am always surprised by how tipping the balance in a dish can so easily transform it from delectable to inedible. How many times have you oversalted or undercooked a dish? When did you last lament wasting a fistful of pine nuts or a beautiful piece of fish, just because of a careless extra minute or two in the pan?

Aubergines are particularly prone to such disasters. I know some pretty confident cooks who, after a couple of memorable failures, wouldn’t touch them with a pole. It’s not that they are particularly hard to cook (although they do take a bit of practice to get right). It has more to do with how unmitigated these failures are. A limp, gray, rubbery, undercooked chunk of aubergine could easily put you off for life. Likewise, a slice that has spent too much time in a frying pan with oil that wasn’t hot enough, going dark and bitter and terribly fatty, wouldn’t turn anyone into a fan.

On the other hand, well-prepared aubergine – cooked through and nicely browned on the outside, full of flavour after absorbing just the right amount of oil or sauce – is heavenly. Balanced with other components, which add texture and cut through its natural richness, an aubergine can turn into the most thrilling vegetable around. I can think of countless examples, but the one that best illustrates this point is moussaka, the aubergine-and-meat dish from Greece, with variations across the Balkans and the Middle East.

A bad moussaka can have a lasting effect. I was unfortunate enough to experience this last summer, and it happened in Greece, of all places

A good moussaka has all the qualities that allow aubergine to shine: vegetables that are thoroughly cooked but keep some texture; a layer of browned lamb for meatiness and texture; a cover of creamy bechamel; and enough tomato acidity to offset the richness. A bad one – well, it can have a lasting effect. I can tell you this with confidence because I was unfortunate enough to experience this last summer, and it happened in Greece, of all places.

It was while I was staying with my family in a house we rented on one of the Cyclades islands. The moussaka in question was bought in a little roadside taverna that also sold crates of fresh home-grown vegetables. The picture-perfect scene was amplified by the warmth of the operation: a grandmother in the kitchen, a mother waiting on tables and selling vegetables, and a young son helping to fill up the shopping bags.

This was so promising we didn’t even bother getting anything else for dinner, apart from the obligatory Greek salad. This salad was all we ended up having. The moussaka we so wanted to love was left behind, quietly, on everyone’s plates; bits of unctuous aubergine and tiny mince drenched in a mixture of runny bechamel, lamb fat and tomato sauce. The balance was all wrong, and no amount of goodwill, or culinary skill, could have saved it.

This is the first time I’ve revisited moussaka since. My recipe, which is loosely inspired by that dish, is safer than the original, particularly if you harbour a bit of auberginephobia. Cooking all the elements in one roasting pan, although not standard, will allow you to judge your progress as you go, addressing imbalances when you need to. Follow the instructions, keep your eyes open, taste on occasion, and you’ll find yourself firmly placed on the road to success.

Method
Step 1 Heat the oven to 240 Celsius. Add the aubergine, lamb, onion, oregano, oil, tomato paste, garlic, cinnamon, allspice, red-pepper flakes, 1¾tsp salt and a good grind of pepper to a 26cm-by-34cm (or similar) roasting tin and mix well to combine. Bake until the mixture is well browned, stirring twice throughout and breaking apart the meat with a spoon – 30 to 35 minutes.

Step 2 Remove from the oven and continue to break apart the meat very well. (Don’t worry if you break apart some of the aubergine, too.) Add the canned tomatoes with their juices, lightly crushing the tomatoes by hand. Stir in the chicken stock and parsley, then return to the oven and bake for another 35 minutes, stirring twice throughout, until the sauce is thick and rich and the aubergine is very soft. Remove from the oven and turn the temperature up to 250 Celsius.

Step 3 While the casserole is in the oven, prepare the topping. Whisk together the yogurt, yolks, flour, garlic and half the Parmesan with ¼tsp salt and a good grind of pepper. Once ready, spoon the yogurt mixture over the lamb and aubergine, gently spreading to cover. Top evenly with the remaining Parmesan, feta, pine nuts, parsley and red-pepper flakes.

Step 4 Bake until golden and bubbling – 15 to 20 minutes. Leave to cool for about 15 minutes before serving.

This variation on moussaka calls for a lively red wine that won’t be drowned out by the dish’s assertive flavours, writes Eric Asimov. Why not a Greek red, like a xinomavro, if it’s not made in too oaky and tannic a style? Limniona is a rare red grape that has been resurrected; from a producer like Zafeirakis, it would be ideal. You could try a Montepulciano d’Abruzzo from the Adriatic coast of Italy, or a frappato or Cerasuolo di Vittoria from Sicily. If you happen to have an older Château Musar around, from the Bekaa Valley of Lebanon, this may be an ideal time to serve it. Or, if you want to be bold, why not try one of the new wave of retsinas, Greece’s traditional whites infused with pine resin? – New York Times

Paddy Holohan: ‘MMA was a liferaft to grab onto’
9

Keto diet: What is it and does it actually work?
Real news has value SUBSCRIBE