Smoking up a storm: Backyard barbecue cooking on this side of the Atlantic

The Hang Fire Cookbook: Recipes and Adventures in American BBQ gives instructions on how to build your own smoker, care for it and cook on it, as well as lots of great recipes 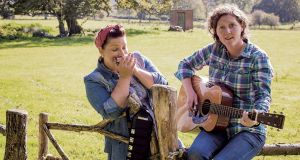 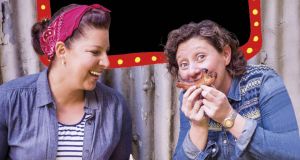 Three years ago graphic designer and creative director Samantha Evans and social worker and academic Shauna Guinn left their high-flying London careers to embark on a six-month road trip in the US. They were women on a mission: to eat as much barbecue food as they could.

It was a life-changing experience, and on their return to the UK they ditched their career paths, opting instead to make barbecue food in the true low’n’slow style.

“We started the business with one smoker, popping up in a tiny backstreet boozer in Cardiff which our friends owned. The plan was to get the smoker delivered from America and just practise on the pub locals. By week four, we were feeding hundreds of smoked meat lovers. We moved around different pubs in the Cardiff area, before going into street food,” says Guinn, who is originally from Belfast.

Turn the clock forward two years, and the pair have just opened their first restaurant, Hang Fire, in the Welsh town of Barry, near Cardiff airport. “We took 1,300 bookings in the first 24 hours, so we have been slammed from the off. We are fully booked until the end of May.”

Meat is still the star of the show. “Instead of having to pack up and move on, we can now smoke and serve all the meat from our four smokers at the restaurant and we have a handmade, customised Argentinean woodfired parrilla grill.”

Having the restaurant won’t keep them off the road however. “BB King, our handmade smoker, has an incredibly busy year ahead. We will be touring the food and music festivals of south Wales and beyond to smoke up a storm.”

They’ve just released their first book, The Hang Fire Cookbook: Recipes and Adventures in American BBQ, which gives instructions on how to build your own smoker, care for it and cook on it, as well as lots of great recipes (most can be cooked on a normal backyard grill, or even in the oven).

“Most of our friends tend to own grills and not smokers, although that is changing,” Guinn says. Their advice for backyard grillers is “to create a steady fire, banking your coals, so there are hotter and cooler parts of the cooker. That’s how to avoid burnt on the outside, raw in the middle.”

The Hang Fire Cookbook is published by Quadrille, £20

Enter our competition to win a Weber Master-Touch barbecue, a Weber chimney starter set and a voucher for a Weber Essentials barbecue course at Cooks Academy