Zozimus review: Catherine Cleary gives the thumbs down to this Dublin bar

It may be a good bar for a Tinder date, but not for food 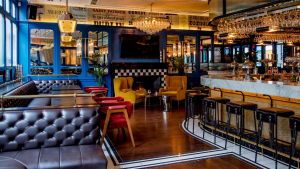 The universe did not want me to eat in Zozimus. I should have listened to the universe. It starts with the phonecall to try to book a table. Looks like they’re going to be very full, I’m told by someone who sounds like they’re peering through fog to try to discern land ahead. Could I sit at the bar and eat? Maybe is the short version of an answer woollier than the Dunnes Stores jumper aisle.

Several hours later I’m sitting on an overdesigned but comfortable high stool at a white marble bar. But the signs keep coming. Our friendly barman tells us the kitchen has run out of the “Yorkshire pudding pastry” so we can’t order the Yorkie stuffed with liver parfait. “You’re making your Yorkshire puddings out of pastry?” I squeak. Well, that’s what he’s calling it, he says in a “details schmetails” sort of fashion. Later, the absence of Yorkshire pudding will feel like a bullet dodged.

Zozimus is at the top of Anne’s Lane off Anne Street South in Dublin city centre. It’s been done up in no-expense-spared fashion as a cocktail bar in handsome teal panelling, white marble and wood. A roof of colourful umbrellas in the street outside looks slightly the worse for wear. The bar is named after Michael Moran, a 19th-century blind Dublin street poet, who called himself Zozimus. It’s a good name for a bar as it’s a word that sounds like you’re already sozzled when you say it.

The menu is fresh and different, if a little incoherent, like the food blog of a hedge fund manager on a mid-life crisis gap year around the globe. Think Asian-y, Italian-y Spanish, Middle eastern with a large dollop of blokey New York and London. Poor old Zozimus would be mystified.

Our first plate is three bite-sized bruschetta, small towers of toast topped with red and yellow tomatoes, strangely rubbery slices of burrata and a basil leaf. It’s fine in a looks-over-taste sort of fashion. Nothing trembles or drips or explodes with flavour like better ingredients might.

Lamb “lollipops” are more like lamb Magnums coated in thick brown breadcrumbs which are claggy rather than crisp, finished with a slick of acidic lemony mustard. It’s a lollipop that has to be eaten with knife and fork. Sashimi tacos come in shells that have turned soggy under the weight of their uninspiring contents. There’s salmon and mango in one, brown lumps of tuna in a tongue-stinging wasabi cream in the other. The crab and chilli doughnuts look good. And they might have been were they served warm. But these too are on the “cold bites” menu so are leaden lumps of dense dough stuffed with insipid crab meat. They’ve been sprinkled with a dry dandruff of grated cheese instead of the lemon crème fraiche promised on the menu. On another plate eight spindly spears of asparagus have been grilled to a bitter finish and dotted with a jam-sweet brown sauce that’s like YR only worse. Two large slices of pancetta are balanced on top, fried to a yellow crisp, along with a slice of toasted bread that looks like it fell onto the plate accidentally.

The apple pie fries with salted caramel dip are “phenomenal”, we’re told. They are. Phenomenally ordinary, like party food from Iceland, tooth-cementing brown apple syrup sandwiched between fingers of flaky pastry topped with sugar and served with a brown sludge of salted caramel in case your blood sugar levels haven’t quite peaked. The “Scotch crème egg” will finish that job. I’m imagining a Heston-type remake here, a handmade chocolate shell filled with subtle white creamy concoction finished, maybe, with a mango coulis yolk. But no. It’s a crème egg with all its throat-burning cloying sweetness rolled in some more chocolate, cut in half and served weirdly warm with a lemon curd that has the consistency of something sneezed over the whole mess.

By the end of the meal we’ve taken refuge in the endamame beans. They’ve been given a greasy slick of truffle oil but are otherwise fine. The bowl is €6.50, though.

And that’s the last sting in the tail of Zozimus. These small plates of food are shockingly expensive. We’ve topped €100 without even trying and leave feeling hungry. Yet the place is heaving. Just before 9pm they dim the lights. My friend reckons lots of people are Tinderers here on dates. The barman calls us “laydees”.

Okay, the universe, we hear you loud and clear. Zozimus? Not for us.

The meal for two with three glasses of wine and two bottles of water came to €100.50