The Fumbally review: Our reviewer would rather keep this restaurant to herself 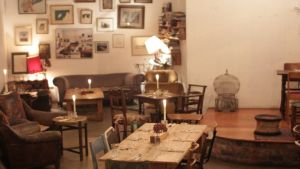 The New York Times restaurant critic, Pete Wells, says he likes to act like a golden retriever,  drop a ball at his readers’ feet every week and go, “here”. Nosing out a great new place is always a pleasure, but I was tempted to bury this week’s ball in the back garden – partly because I really just popped around the corner to see what a local cafe looks like by candlelight.

There’s also the cringe factor of knowing the owners. Aisling Rogerson and Luca D’Alfonso opened the Fumbally in a newly-built corner block four years ago. They packed it with junkshop furniture, put soul into a soulless space and opened the doors. They started with just falafel on the menu. Proving that good guys can win, the Fumbally grew from an amateur falafel joint into one of the city’s most thriving and talked about cafes.

I spot Aisling before I’ve even locked up the bike. She’s not thrilled. “Do you have a table for two?” I ask her, as we survey the barely half-filled room. “No. None. We’re full,” she says before giving me a “do your worst” pat on the shoulder.

The Wednesday dinners are the only night of the week the Fumbally opens in the evenings. Chunky candles are put on the mishmash of tables and each week a different food theme is chosen. You can’t book a table. There’s a first-come-first-seated policy, walk-in only from 7pm. Tonight it’s Mexican. And it’s only when the food arrives that it’s game on. Because I love nearly every mouthful and so I’m obliged to spill the beans. So here. You’re going to like this.

There are toasted seeds blackened with a lime and chilli coating to snack on while I wait, with Anne Enright, for my friend. Actually I am with a well-thumbed library copy of Yesterday’s Weather, a short story collection so visceral it makes you wonder if the writer has been rummaging around in your skull and stealing thoughts you haven’t even voiced to yourself.

Limes are everywhere tonight, but first up is a shot of fermented cabbage juice with ginger. Yes indeed. “Weirdo,” my friend says, making her best gag face. But it’s purple cabbage so not dishwater green but a rich claret colour, sharp and salty like sauerkraut juice. Warmth from the ginger rounds it out into something sip-able rather than a shot of joyless “health” juice.

There are no starters, just a plate of blue corn tortillas, three side-plate- sized circles of crispy fried corn pastry as delicious as the popcorn smell they pump out in multiplexes.

The tortillas come with a choice of two toppings. Mine is a lime marinated haddock; china-white chunks of fish “cooked” in a sweet lime juice marinade. The fish is fresh and soft, not rubberised by spending too long in the acidic juice. It’s tumbled with gently pickled or charred vegetables, delicate rounds of radish, softly pink red onion shards, cucumbers, green beans and coriander. Ashe’s “greens” version has a similar mix of charred and then lightly pickled vegetables with cannellini beans cooked to a more perky finish than the bean mush that normally tops a tortilla. Both toppings contain the occasional pith-free chunk of pink grapefruit for a different zing. Charred corn cobs come in a bowl with corn bread. The cobs are perfect, the bread is not. It’s stubbornly solid and breaks with such bounce that a chunk flies into a water glass. Served hot it might have been a different bread altogether.

A house slaw is a cool, calming cabbage affair speckled with onion seeds. Two sides dial up the spice: we get peas with a brilliant, ferocious chili, peanut and sesame paste. There’s a bowl of kimchi with vegetables so drenched with fermented swampiness that they have left almost every trace of their original taste behind and become a different kind of experience.

Dessert is a lemony brown sugar posset topped with a dark chocolate ganache. I like both, just not together. There’s a peanut and seed bar held together with date-syrup toffee that’s so sticky it that it has adhered to the napkin on which it’s served. Like Flann O’Brien’s bicycle riders who become part-bicycle, this bar has become part-napkin.

The Wednesday dinners are cooked by a rotating panel of chefs. Tonight it’s the turn of Laura Caulwell. Aoife Allen, Harry Colley and Daniela Carnevali are also regular chefs. Guest chefs step in occasionally. Next month Angus Denoon is bringing his Indian street food to the tables. This means your dinner is being cooked by a fresh chef, bringing a new idea and some new ingredients to the kitchen rather than slipping into the well-worn groove of assembling dishes from a laminated menu.

The bill comes in under €60 for two, which is proper value given the upward creep of midrange dining bills. I’d like to keep this all to myself. I stopped going to the Fumbally at weekends after being met with a 20-minute queue. The nights are busy but not manic and that delicate balance is under threat if a reviewer starts wagging her tail too vigorously. But here it is folks: Wednesdays at the Fumbally feature some of the city’s best casual dining. Go fetch.