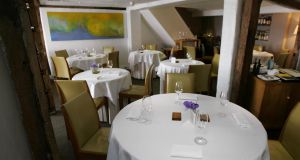 Heston Blumenthal’s The Fat Duck in England has regained its three Michelin stars in the 2017 guide.

The famous restaurant was absent from last year’s guide after a temporary move to Melbourne, Australia. But after eight anonymous inspections during the course of the year. it was deemed worthy of regaining its coveted status as one of only 100 or so restaurants in the world with three Michelin stars.

For the first time the Britain and Ireland awards were announced at a ceremony, which took place at the Institution of Engineering and Technology in central London.

Raby Hunt in Darlington received a second Michelin star, making it one of only around 3,000 restaurants in the world to hold such an accolade.

One of the biggest cheers was for the award of a single star to London landmark The Ritz.

In total, 17 new single stars were awarded, seven in the English capital, including Trinity in Clapham and Veeraswamy in central London. The 10 restaurants outside London included Thomas Carr at the Olive Room in north Devon, the Wild Rabbit in Oxfordshire and Peel’s in Solihull.

And, of course, our own Heron and Grey in Dublin.

Another new award for welcome and service went to Peel’s.

The Samling in Ambleside, Cumbria, the Royal Oak in Bray, Berkshire, Bybrook in Castle Coombe, Wiltshire, and the Isle of Eriska in Benderloch in Scotland were all recognised for retaining a Michelin star despite a change of head chef.

In London, Angler in the City, Pied à Terre in Bloomsbury, Outlaws at The Capital in Knightsbridge and Petrus in Belgravia were recognised for the same reason.

Gidleigh Park in Devon retained its two stars despite a change of chef.

Of restaurants that retained their chefs, all kept their Michelin stars from last year.

Off the charts: why this paint colour is Instagram's favourite
8

I was 30 weeks and two days pregnant. And in labour
Real news has value SUBSCRIBE