Delahunt: an exciting new restaurant in a beautiful building on Lower Camden Street 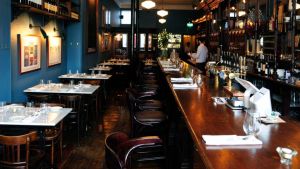 The net curtains are neat. In another place they’d tip into twee. But this room has the bone structure to carry them off, like a frumpy haircut on a beautiful face. We’re sitting beside them in the window seat of Delahunt on Dublin’s Camden Street. Outside, on a frosty Saturday night, passers by are stopping regularly to gawk in the door. They stand with dragons’ breath billowing against the glass as they peer inside and smile.

This is a place that feels properly romantic, like stepping into a photograph of handsomer times. The restaurant opened in November in what was Carvill’s off-licence, a shop where time had put its feet up and lit a pipe several decades ago. Bottles used to be displayed on a mirrored cabinet shelf full of nooks and flourishes. You leaned on a long counter, smoothed and dinged by generations, as you waited. Crates of booze were stored in the glass panelled snug at the back.

After an 18-month refit the shelves, the art deco lights, the old counter and the snug are still all here. Beside us there’s a tiny narrow door with a horse head knocker, prompting a theory from across the table that the Carvills “were the last family of Irish goblins.”

The counter has been lifted on a small platform to take it to bar height. Our seats have been built into the window beside a toasty radiator in what might otherwise be a draughty spot. The net curtains are hung on copper plumbing pipes, a decor statement that says yes we’re old but think hipster rather than hip replacement. The walls have been painted a denim blue and are hung with splashes of graphic colour images.

All Delahunt is missing to complete the sepia glow is a dispensation on the smoking ban to let a cloud of tar hover in the high ceiling over our heads. So far so beguiling. But my inner cynic suggests they’ve got the room so right the food must be pretty ordinary? After a wobbly start, I’m happy to be proved wrong. They’ve nailed that too.

Given the good old days decor, you might expect hefty willow pattern plates full of steaming spuds and gravy to thud down in front of you, but they don’t. But (oh crap) there’s a slate. It’s like peering at a John Hinde postcard and spotting a shawled child with a smartphone.

I’ll forgive them the slate because it has lovely overlapping lengths of house-smoked salmon on it, a round of butter laced with horseradish, sweetly-pickled cucumber and some crumbly (but a bit-too-sweet if I’m being picky) brown bread.

I’ve got the pressed ham hock and crubeens starter which throws me a bit before I taste it because it looks like a fishfinger on steroids. There are dots of “raisin mustard” on the plate, curls of onion, a gentile quenelle of celeriac remoulade and matchsticks of green apple. The good thing is that once you get past all that white space on the plate (for €9), the small mouthfuls pack enough flavour to make you smile.

The main courses are the reason that by the time you read this, I’ll probably have been back for more. There’s a luscious slab of stout-braised beef cheek. But I’m offered a taste of the carrot on the plate first because it’s so good. It’s been glazed with a slick of aniseed-laced stickiness. There’s cavalo nero kale with horseradish riding a fiery trail through its cabbage flavours and wobbly globules of bone marrow. Balanced on the fork they beef up the beef until it’s pure essence of cow.

My potato cake with crispy egg is a lot more sophisticated than it sounds. I can smell it coming to the table, the truffle oil aroma arriving ahead of the dish like a judge’s tipstaff. The “cake” is actually a beautifully layered gratin crisped on top and swimming in that truffle-laced cream. There are capers but they’re not leathery pouches of vinegar tossed in. They’re the baby variety and they’ve been cooked separately into crispy caper fries. There’s more kale, with a citrusy herb, I’m guessing lemon thyme, tangled into it. It’s wintery comforting plate of delights.

“You’re on your own for dessert luv,” says a stuffed dining companion. So it’s me and the rhubarb fool, a lovely glass of vanilla flecked mascarpone layered with bright pink grapefruit and champagne rhubarb and salted pistachios to add crunch.

Respect is what’s going on here. There’s respect for a beautiful quirky building and for the Irish larder of ingredients at this time of the year. The kale and Jerusalem artichokes that are filling the hungry gap in frost-bound veg patches are turned into satisfying dishes with lots of finesse.

Darren Free (34) is the young man behind the venture. He has worked in Dublin kitchens such as L’Gueuleton and The Sussex and is a graduate of DIT’s culinary arts degree. Delahunt is his first restaurant. Dermot Staunton from Locks Brasserie is his head chef, cooking food that more than does justice to the building. Nice one lads. Camden Street just got itself a gorgeous gem of a new restaurant.

Dinner for two with sparkling water, four glasses of wine and a whisky sour came to €120.95.