Breton brilliance: A touch of oh là là in a Dublin crêperie

Review: Get lots of bang for your buckwheat on Dublin’s canalside 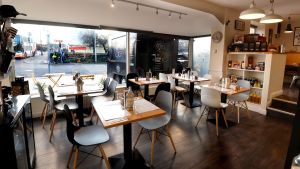 Rapid-fire pancake cook was my first job in food. Aged about 12, I decided to take charge of the two battered iron pans and slap out pancakes most Saturday nights, savoury with mushroom sauce to start and after that, sugar and lemon. It was a cheap and pretty delicious family meal.

Pancakes are so last Tuesday by now but there are many of us who still eat them on days that have nothing to do with pantry clearing, Lenten fasts or a throwback to a time when eggs were seasonal and scarce.

The French still rule when it comes to pancakes. Sorry America (and I know this isn’t the most pressing problem on your plate) but your pancakes are too cakey.

A French crêpe, skin-thin and smooth as parachute silk, is what I like. And that silkiness results from that most magical of ingredients in our fast and furious world: a bit of breathing space.

When the batter is left to rest, according to the cooking bible, Larousse Gastronomique, the flour swells in the liquid and any air beaten in rises to the top and escapes.

Grégory Autret is a Frenchman bringing the seaside crêperie of his childhood to Dublin’s canalside with Le Petit Breton. He was born in Finistere. It’s France’s most westerly department and the name, which used to feature in the shipping forecast, translates as the end of the earth.

Autret’s childhood sounds like it was steeped in food. His father was a chef, according to his website, and his mother ran a foodhall where she made crêpes using a family recipe.

Le Petit Breton is at the end of the run to the city from the airport on the busy corner where Whitworth Road meets Drumcondra Road Lower.

It’s two rooms on two levels with a step up between them and a kitchen at the back of the building. The floor is dark wood and walls are white with banquette seating in the top room where we get the last table.

I’ve been before and each time the cooking gets better. Ingredients like Cashel Blue cheese are being combined with traditional French cooking techniques. It’s as if Autret is blending both his parents’ skillsets as his restaurant finds its audience of Dublin crêpe eaters.

There are non-pancake dishes but the bulk of the menu is the crêpe or galette. Here crêpe means those sweet, silky pancakes made with Breton flour and, in the case of the L’Hivernale crêpe, folded like an envelope over cinnamon-laced, stewed apple and finished with not so much a drizzle as a downpour of salted caramel with a final cloudburst of whipped cream in the middle of the whole thing.

It has been ordered in the ‘If you’re going to sin? Sin big’ spirit of menu choices.

La Banoffi (an English invention) is a forgiveable cross-cultural fusion where the same quality of pancake comes with bananas, plenty of caramel sauce and toasted flaked almonds.

The savoury pancakes or galettes are not described as buckwheat on the menu but that’s what arrives, and it’s what I’m here for. These toasty brown pancakes with a paper crispness on their edges are a speciality of Brittany, parts of Normandy and the Vendée.

Buckwheat flour has a distinct tang that’s warmed down a notch by the egg in the batter and here it’s sweetened with honey spooned around the outside. Inside is goats cheese, the light fluffy kind rather than the gloopy industrial log variety. Walnuts are fresh and perfect and the whole thing is finished with fresh rocket.

The final choice is the most traditional combination of ham, tomatoes, onions and Emmental cheese.

Trendy is not a thing in Le Petit Breton. It’s as timelessly French as Johnny Hallyday and air traffic controller strikes. The coffee is great.

Autret told my friend the last time we visited that he’s been scoping out premises south of the river to expand his Breton empire.

There is no tweaking of the imported delicacy to suit the local palate or the flighty fads of social media. But from the look of the crowd on a Sunday afternoon I’m not the only one who’s taken someone else’s childhood staple to her heart.

Food provenance: Salmon from Kenmare, that Cashel Blue cheese and flour from Brittany.

A coffee homecoming
My coffee crush Granthams have opened a second larger shop on Camden Market which is off Camden Street in Dublin, but better known as Grantham Street.

Given the name it’s a bit of a homecoming. They even have a leather couch (younger readers see Friends on Netflix for context). Between that and the 1990s Spotify list playing when I visited recently, it felt like a nice return to Dublin’s friendly culture of independent coffee shops that weave themselves into your routine.

The Dark Arts coffee is as good as in the original coffee shop on Aungier Street and pastries are from Arun Bakery. A slice of vegan banana bread with sugared walnuts on top kicked off the day nicely.

Ross O’Carroll-Kelly: ‘While I hate lying to him, that’s my job as a parent’
8

My daughter is excluded from the friendship groups in school
9