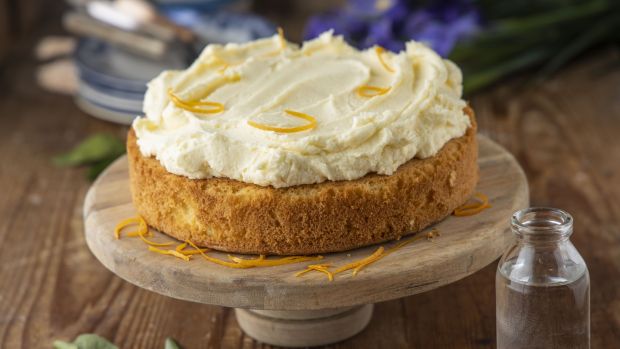 1 Preheat the oven to 190 degrees or 170 degrees if using a fan oven. Grease and line a 20cm round cake tin with a disc of parchment paper.

2 Put the eggs and sugar into a large bowl and whisk using a stand mixer, electric beater, or by hand, until thick and trebled in volume. This will take anywhere from five to 10 minutes. The mix should be voluminous and pale in colour – you should be able to make a figure of eight that holds its shape when you lift up the whisk.

3 Add the melted butter, followed by the vanilla and half of the flour. Fold in gently, until most of the flour is incorporated, before folding in the second half.

4 Pour the mix into the prepared tin and bake in the preheated oven for 20-25 minutes until golden, or until a skewer inserted into the centre comes out clean. Remove the sponge from the oven and leave to cool for 10 minutes in the tin before turning out on to a wire rack to cool completely.

1 Beat the butter for a few minutes until very pale and soft. A stand mixer or electric beater is useful for this.

2 Add half of the icing sugar, and beat well to combine, before adding the second half, mixing well until smooth and pale.

4 Spread the buttercream on the cooled cake and garnish with orange zest.

12 wines to buy for your staycation this summer

Waterford: An insider’s guide to food, drink, activities and walks