‘Recently I hit rock bottom: lunch was half a tub of gorgeous banana caramel Ben & Jerry’s’ 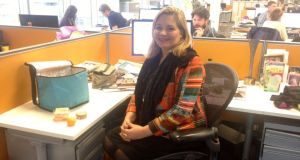 Recently I hit rock bottom: lunch was half a tub of gorgeous banana caramel Ben & Jerry’s sent in by a PR company. It had to be eaten or it would have melted. That was my excuse, though I did share. A little.

Afternoon snack was a sizeable chunk of gourmet brack provided by one of our food writers and then around 5pm the “tin” (they’re plastic now) of Cadbury’s Roses turned up. This year’s new one – the truffle in the red and blue wrapping - is great. Four are better.

How many calories I had consumed, having failed to bring a lunch to work, is beyond me and yet I was starving by the time I was preparing dinner at home at 8pm. So starving I ate a couple of packs of buttons left over from the trick or treat box while waiting for the rice to cook.

This was not good.

Since then, I’ve started twice-weekly Pilates with Women on the Run and am following founder Cathy Soraghan’s menus, which means becoming familiar with portion control. A typical lunch is now two oatcakes, three disks of mozzarella drizzled with Balsamic and pepper, two teensy rings of red onion and one lettuce leaf, followed by a mandarin orange.

Chewed slowly, it’s satisfying, and this is how I plan (hope, pray) to continue until I drop some weight. My favourite lunch ever, though, is in my metal Peanuts lunchbox and I’m eight years old. Tuna sandwich, pickle on the side, small piece of homemade chocolate cake with buttercream icing. The pickle is reserved for the cake. I plunge it into the heart of the fudginess and the combination tastes divine. I had tuna sandwiches nearly every day for the rest of my school career, which may be why as an adult I can’t eat tinned tuna. I’ve got some weird allergy to it that makes me fall asleep after eating it. Seriously. If only I had a similar aversion to ice cream.

Donna Hay: Salty and sweet, the chicken is the star of this show
8