Beerista: Peter Curtin, of the Roadside Tavern in Co Clare, on his hopless gruit beer 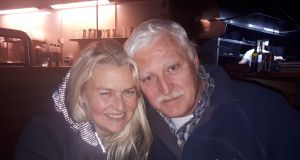 Can you make a beer without hops? That’s the way they used to do it, says Peter Curtin of the Burren Brewery in Lisdoonvarna, Co Clare. “Prior to the 1500s . . . gruit beer was the only beer,” he says.

Gruit is beer made with herbs, from before hops were discovered for their bittering and flavouring qualities. Curtin recently brewed his own, unique version of this ancient style made with yeast harvested from the wilds of the Burren.

“I specifically went to a spot that’s called the hill of the fairies,” Curtin explains, sitting at one of the long benches at the Burren Storehouse bar, where pipes stretch up into the ceiling to connect to the tanks in the brewery. We’ve been served a special dish of duck cooked on the wood-fired grill to pair with Curtin’s new seasonal beer called Euphoria.

Curtin describes how he left the wort in the Burren “for five days and five nights”, grew it up, had it lab tested and then used the yeast for his new seasonal beer. He enlisted the expertise of herbalist Lisa Guinan to select a variety of herbs including lemon verbena, lime blossom, yarrow and rosemary.

The resulting beer is a little like a Belgian Lambic sour, with a deliciously light, refreshing body with some earthy flavours balanced with a citrusy, clean finish. Curtin, who says it has a mild euphoric effect, calls it “the happy beer”.

The Burren Brewery was last year one of three Irish breweries listed in the Lonely Planet’s Global Craft Beer Guide alongside Galway Bay and, in Cork, Franciscan Well. It was founded in 2011 in the Roadside Tavern, which has been in the Curtin family since 1893, while next door is their famous Burren Smokehouse. On draught you’ll get their lager, red ale and the excellent Burren stout to pair with hot-smoked salmon or a bowl of one of the finest chowders on this island.