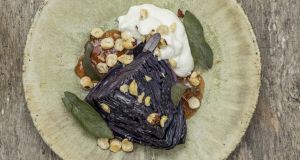 I can’t resist a good cookbook. I confess I tend to go for the cheffy, nerdy ones as opposed to the glitzy lifestyle ones. I’m never going to have abs like Joe Wicks anyhow. I’d only end up flicking through it while double-jobbing crisps and chocolate in my jim-jams.

These recipes are about paying homage to great cookbooks and cooks.

The red cabbage recipe is my take on Stephen Harris’s of The Sportsman pub in Kent. To say that in his words this “grotty little rundown pub by the sea” punches above its weight is a magnificent understatement. It’s won a Michelin star and continually teeters at the top of the top 50 gastropubs in the UK.

Chef devotees make the pilgrimage from far and wide to eat Harris’s simple, carefully considered food that sings of the local terroir, myself included. I went there a few years back to beg him to come and cook in the Tannery for the West Waterford Festival of Food. He came, it was stupendous.

Chez Bruce in Wandsworth is another legendary restaurant. On the site of Marco Pierre White’s seminal Harvey’s, it is voted London’s favourite year after year. It wears its Michelin star easily and has been pampering Londoners with old school deliciousness for a long time. I am forever ogling the head chef, Matt Christmas’s food on Twitter and Instagram. Have a look yourselves and drool your way into happy oblivion. For me as a chef, it’s a constant beautiful barrage of ideas and inspiration.

The cabbage is a twist of the classic that is served in The Sportsman. Its genius is in its simplicity and typical of the man. We would call this making a silk purse out of a sow’s ear.

The plums are something I cook in winter. They are perfect with the wondrous Crozier Blue. The juice from the plums will giddily enhance your favourite sparkling wine, gin or vodka.

Do yourself a favour and eat them with these decadent Parmesan biscuits from Chez Bruce. They are a little bit of comforting brilliance.