Nothing can touch red Burgundy at its best

The use of the Burgundy name is now restricted solely to wines made in the region, which has become a destination of choice for many Irish holidaymakers 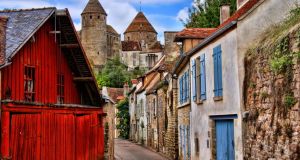 Beaune: many of the old buildings have been restored making it a very pleasant town to stroll around, with plenty of shops offering wine, food and much more

Two of the world’s most famous grapes originate in Burgundy (or Bourgogne as it is officially known). Virtually the only white grape variety grown here is Chardonnay, with Pinot Noir holding the same primacy for red wines. They produce some of the world’s greatest and most sought-after wines

Producers around the world abused the name Burgundy for many years, using it for any wine they felt appropriate. Thankfully, its use is now restricted solely to wines made in the region. Now, it seems, the region has become a destination of choice for many Irish holidaymakers. A growing number of friends and acquaintances have spent a happy week wandering or cycling along paths through vineyards, stopping for lunch in cafés, before resting in a B&B for the night.

Beaune is a good place to start. A bustling town of 22,000 citizens, it is the centre of the wine trade. Many of the very impressive old buildings have been restored making it a very pleasant town to stroll around, with plenty of shops offering wine, food and much more besides. Although tourism has increased greatly over the past decade, the town retains a charming character.

On my last two visits it was the beauty of the countryside that struck me. Drive 10 minutes out of Beaune, away from the motorway, and you are travelling through some of the most famous wine villages in the world. Another five minutes, up into the hills, and you are in la France profonde, a picturesque countryside of rolling hills, quiet lanes and pretty villages. Cycling and walking take a little longer, but either is a far better way to see any countryside. The BIVB., the body responsible for wine in Burgundy, has produced a very handy booklet with details of wine producers and restaurants in the region. It can be downloaded from bourgognes- wines. com. The site also suggests well-marked cycle and walking routes. I would be very tempted to lose myself in the beautiful bucolic wooded hillsides of the Mâconnais-Beaujolais.

Returning to the wines, the story is less cheerful. For many years Burgundy was too small and the wines too inconsistent to appeal to collectors, particularly those from the Far East. As a smaller region, there simply wasn’t enough wine to “make” a market. Apart from the hideously expensive wines of the Domaine de la Romanée Conti, investors tended to head straight to Bordeaux.

This has all changed recently, and worldwide demand now far exceeds supply. Whereas some top Bordeaux château can offer 20,000 cases of their wine each vintage, there may be only a few hundred cases of an equivalent in Burgundy, to be divided up amongst a growing band of buyers from all over the world. The prices of the very best grands crus have rocketed, making them only affordable to the super-rich. Even the premiers crus are moving rapidly upwards in price.

Should we be concerned about these rising prices? If, like me, you love Pinot Noir, the answer is yes. Other parts of the world – Germany, New Zealand, Chile and the Yarra Valley and Mornington Peninsula in Australia – are producing some very tasty Pinot Noir, but none can touch red Burgundy at its best. At a more reasonable price, the top domaines produce small quantities of Bourgogne Rouge, often the produce of younger vines, or a vineyard located on the wrong side of the N74, the main road to the east of the Côte d’Or, or simply wine not considered good enough for their grand vins. But these days, Burgundy has much more to offer than these elite estates. Further south and west, the Mâconnais, Hautes- Côtes of Beaune and Nuits can offer canny buyers wines of real interest. And the Bourgognes Rouges produced by the larger négociants have shown real improvement. They may lack the individual character of the small estates, but these days, some offer good value, in Burgundian terms at least.