More chicken, fewer spuds: How the Irish diet has changed

Food Month: Our eating habits have undergone a dramatic change in the past 40 years 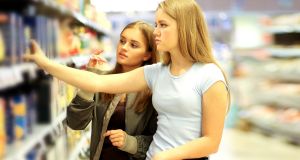 The history of the Irish diet is also a story of ourselves. Looking at the foods we ate in the past opens a door into what was happening socially, culturally and economically on the dirt floors of rural cottages, the stone hearths of the great houses, and the streets of our cities. What we eat now, compared with years gone by, tells a tale of the island’s transformation – and the when, how and how often of our eating habits are just as revealing.
Chicken: 3m a week
“Mr Leopold Bloom ate with relish the inner organs of beasts and fowls. He liked thick giblet soup, nutty gizzards, a stuffed roast heart, liverslices fried with crustcrumbs, fried hencods’ roes. Most of all he liked grilled mutton kidneys which gave to his palate a fine tang of faintly scented urine,” James Joyce wrote in Ulysses, a story set in 1904
Our meat-eating habits have changed considerably. This week alone three million chickens will be killed to sate Irish appetites. Fifty years ago people in this country barely ate chicken. In 1960 the World Health Organisation surveyed Irish consumption of all poultry – duck, turkey and chicken – and found that we ate 6kg each a year. By 1980 that annual figure had reached more than 20kg each. Today it stands at 22kg.
Traditionally, chickens and poultry were managed by women in rural settings and seldom killed for the home table. Eggs were a source of income rather than chickens being a source of protein. The eggs were sold to buy household goods or shoes for children – so a regular small income from farm poultry was crucial for women running households.
Eating a chicken was something of a rarity, but then so was eating meat in general. In 1936 the Irish diet consisted of only 7per cent meat, according to the National Nutrition Surveillance Centre. About a third was dairy and a quarter potatoes, the rest being cereals and seasonal vegetables.
Rise and fall of the potato
“Many Irishmen have but one day on which they eat flesh, namely on Christmas Day. Every other day they feed on potatoes and nothing but potatoes,” Johann Georg Kohl observed on his travels around Ireland in 1841
Ireland was the first European country to adopt the potato as a key crop when it arrived in Europe in the 1600s, and the turbulent period of the Cromwellian wars saw it spread rapidly through the country.  Fields of wheat or oats could be burnt; potatoes were still good to eat after months in straw underground. The success of the potato also led to the decline of many pulses and cereals that had been part of the national diet in the medieval period. Beans, peas, wheat, oats and rye – even lentils – had been commonplace. Our overdependence on the potato brought death and social destruction to Ireland in the 1840s,when a blight from Belgium swept through Europe and then Ireland.
Yet the potato, along with dairy produce, remained the central food in Ireland for another 100 years. The first Irish national nutrition survey, of 1946-48, found a whopping intake of 549g each a day. But by 1990 our potato consumption had halved, beginning a decline that has lasted subsequent decades. Ninety-nine per cent of us still eat boiled, mashed or roast potatoes daily. But our preference for processed potatoes – chips, wedges and so on – rose from 13 per cent in 1980 to 26 per cent in 1990 and has now reached a point where they account for half of all the potato we eat, according to Euromonitor.