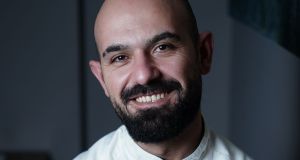 Michelin star: Ahmet Dede, who has won the award for his restaurant Dede, in Baltimore, Co Cork

Ireland has a new Michelin-starred restaurant, with the much-anticipated award of a star to Ahmet Dede for his restaurant Dede, in Baltimore, which opened last year.

A clearly emotional Dede, who runs the restaurant with his business partner Maria Archer, said: “It just means the world to me.” In its citation, Michelin said: “The supremely talented chef Ahmet Dede shares his Turkish heritage with the lucky people of Baltimore.”

The award to Dede was among the first group of new recipients of one-star status to be announced at a virtual awards ceremony tonight for Michelin Guide Great Britain and Ireland 2021. The awards were jointly hosted by Davina McCall, in London, and Michelin international director Gwendal Poullennec, in Paris. In total there were 17 new one-stars revealed,  along with three new two-stars, and two joining the upper echelons of three-stars. The new two- and three-star establishments are all in London.

This is the second Michelin star Ahmet Dede has brought to Baltimore; he previously earned one in 2019, when he was head chef at the now closed Mews restaurant. Restaurant Dede was originally supposed to open on March 16th last year, but that was delayed by Covid-19 restrictions.

When it was finally permitted to open for the summer season, Dede earned a 9/10 score from the Irish Times restaurant critic Corinna Hardgrave, who says: “Ahmet Dede’s food has become more intuitive, and that’s what makes this chef so exciting. He has mastered technique and now his Turkish roots are influencing the dishes he creates.

“When I ate in Dede last summer, a standout dish was composed of different varieties of tomatoes from Cape Clear that had been marinated, pickled for 10 hours, pressed so that their flavour was concentrated, scattered with tiny leaves of red, green and Thai basil, and finished with a foamed gazpacho that had an echo of exotic Turkish spices. This was an evolution of a dish I had eaten previously in Mews.”

In an evening of strong performances from Irish restaurants, Ross Lewis, of Chapter One, in Dublin, was awarded the Chef Mentor award in recognition of his nurturing of young chef talent. “It’s early in the morning, but I feel like I need a stiff drink,” Lewis said in his prerecorded acceptance speech.

The Irish chef Clare Smyth received Michelin’s ultimate accolade when she won a coveted third star for Core, her London restaurant, which opened in 2017. Smyth, who is from Co Antrim, was chef-patron at Restaurant Gordon Ramsay between 2012 and 2016.

The first award of the the guide’s 2021 prize ceremony, the Welcome and Service award, was made to Saul McConnell and Pearson Morris of Noble in Holywood, Co Down.

Michelin’s first Green stars, for businesses that embrace sustainability, were awarded to 23 restaurants, three of them in Ireland and all of those in Galway. They are Inis Meain Restaurant and Suites, on the Aran Islands, and Kai and Loam, both in Galway city.

Just before the ceremony, four Irish restaurants were named new winners of a Bib Gourmand, the Michelin star’s little sibling.

Goldie, in Cork city, Table Forty One, in Gorey, Co Wexford, Spitalfields, in central Dublin; and Volpe Nera, in Blackrock, Co Dublin, were among 16 restaurants to be awarded Bib Gourmands in the Michelin Guide to Great Britain and Ireland 2021. They join 110 other restaurants around Ireland and Britain that Michelin says offer “good quality, good value cooking”.

Volpe Nera was opened by Barry Sun Jian, former head chef at Etto, in Dublin 2, in November 2019. Michelin noted its “carefully cooked Mediterranean dishes with a modern edge”, and described it as “an expertly run neighbourhood restaurant.”

Goldie is a fish restaurant that embraces a whole-catch and whole-fish ethos, using fish landed from small day boats to create gill-to-fin dishes. Michelin described it as “a lively on-trend seafood bistro”.

Spitalfields, a pub turned restaurant famous for its cock-a-leekie pie, is owned by head chef Stephen McAllister. Table Forty One is owned and run by head chef Andrew Duncan.