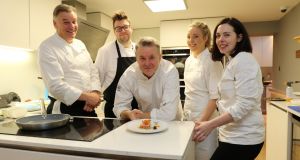 What do chefs eat at Christmas? Anything – as long as it’s cooked by someone else. That’s the usual refrain from weary kitchen staff at the busiest time of the catering year. But give a chef a celebratory meal to cook, even for family and friends, and the chances are they won’t be able to resist a flourish or two.

We’ve enlisted five chefs from restaurants with Michelin stars to suggest seasonal dishes with a twist – a cheffy touch or two that will elevate your Christmas menu to another level. But, we asked them to make them workable for a home cook, so no foams, soils, spherification or other wizardry, just tasty, elegant plates of food that look like they’ve come out of a top restaurant kitchen, which indeed they have.

Dip in to mix and match from a selection of three starters created by Ross Lewis of Chapter One, Ken Harker of The Lady Helen restaurant at Mount Juliet and Danni Barry of Deanes EIPIC in Belfast.

Derry Clarke of L’Ecrivain suggests giving turkey a jolt of flavour by stuffing a boned breast with black pudding, poaching and roasting it before serving it with parsnips cooked four ways and a chorizo crumb. Rather than cook a whole ham, Clarke has come up with the novel idea of poaching little bacon cheeks.

Instead of Christmas pudding, Aoife Noonan, head pastry chef at Restaurant Patrick Guilbaud, takes the heady spices it evokes as her inspiration and serves an elegant poached pear with pain d’épices crisps and Chantilly cream.

Our all-star kitchen team met at the new Samsung Kitchen at L’Ecrivain, where groups of between 12 and 20 can book a show-cooking experience and Derry Clarke, or one of his team, will present a six-course meal.

First to cook was Lewis, who says his Christmas involves a visit from Santa – “the excitement is still great in our house” – followed by a dip in the Forty Foot and a breakfast of Jack McCarthy’s black pudding and Fingal Ferguson rashers.

“This year we’ll be having Christmas dinner with my sister-in-law Sarah and her husband Gavin and the extended family. That said, I have been tasked with items other than the turkey . . . so we’ll probably have a dozen or so Kelly’s native oysters to kick off, then some Burren Smokehouse smoked salmon, and I’m still toying with either a truffle risotto or game terrine with Muscat grapes.”

Harker will be working until midnight on Christmas Eve and then taking on kitchen duties at home. “I’ll be doing the cooking and, as well as my wife Lisa and our little girl Maddy who’s three, I’ll have the in-laws coming over.”

Barry and Noonan are both homebirds who will be returning to the nest. “I am really looking forward to getting home to Mayobridge. It’s rare to get everyone under the one roof these days, so it’s always noisy and fun,” Barry says.

Can there be such a thing as too many cooks in the kitchen? Not when they’re as talented as this bunch. For reservations at the Samsung Kitchen, see lecrivain.com