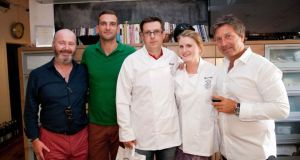 Hugh Sweeney, originally from Donegal but now living in Dublin, makes Ireland’s best fish dish, according to UK MasterChef judge and restaurateur John Torode who judged the final of the competition run by mobile phone company,Three Mobile. Sweeney, who works in his family business, Irish Lobster Ltd and also runs a farmers’ market in Dalkey every Saturday, was one of two finalists invited to cook their dish for Torode and co-judges Ross Golden-Bannon and Andrew Rudd in Dublin last night. Sweeney’s smoked Donegal salmon and spinach lasagne with lemon cheese sauce was the winning dish.

Covid deniers: for the sake of the vulnerable, do what’s asked of you
8