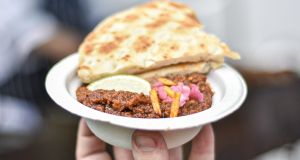 There is a distinctly world food flavour to the menu of signature dishes being offered by restaurants participating in Taste of Dublin, which runs until Sunday in Dublin’s Iveagh Gardens.

The cuisines of India, China, Korea, Mexico, Vietnam and The Caribbean are strongly represented, but you can still pick up a couple of Kelly’s oysters from the King Sitric, roast chicken with stuffing and gravy from Manor Farm, or sausages on a brioche roll from Tesco Finest.

You can expect the longest queues to form for the festival’s winning dish. Pickle Indian street food restaurant won the Weir & Sons Best In Taste dish of the festival award for its Rajasthani laal maas with khameera kulcha, a traditional goat curry with chilli , tomato and onion sauce.

Irish tapas pop-up Grálinn won the Best In Taste award for the use of local and artisan produce. Goatsbridge trout, Macroom mozzarella and ricotta, and Elmhurst Cottage Farm herbs appear on its four-dish menu, available Thursday only,  as one of the Daily Specials.

There are always big queues for the Indian food at the Jaipur Group’s stand, where you can also dress up and have your photo taken at the Taj Mahal backdrop. Black and gold is their theme this year, and some of their dishes have been blinged up, including chicken tikka with an aged black lime glaze, jaggery, caramelised onion and pomegranate dusted potatoes. A stunning vegetarian option, chit chaat taj-wallah, has puffed corn, turmeric sheep’s milk yogurt, golden gram vermicelli, black peas and beans, and mango grit.

Hang Dai, the Chinese with a difference on Camden Street, is bringing its famous sesame prawn toast to the festival, served with pickled vegetable salad and lemon mayo, as well as asparagus spring rolls with kimchi mayo; pork dumplings with sweet soy, chilli oil and sesame; and braised black rice with squid and beansprout salad.

The theme of the event this year is Vive La Révolution!, and the organisers say the line-up of vendors reflect “the revolution of the Irish menu, championing the chefs that are taking culinary risks, fusing Irish and international cuisine and creating revolutionary Irish menus offering foodies unique and eclectic dining experiences.”

In addition to the restaurants that will be serving food throughout the two sessions every day until the event concludes on Sunday night, there are some pop-ups. Healthy fast food chain Leon has three dishes on offer today, including its vegan beetroot Love Burger.

Bowls by Kwanghi takes up a  pop-up slot on Friday and Saturday, bringing Hong Kong street food to the party, including its famous pork and chive steamed dumplings with chilli, soy and sesame rayu. Lil Portie's Caribbean favourites are on site on Friday, and Korean food from Jaru is a Daily Special on Saturday.

On Sunday, it’s the turn of Vietnom, which will be tempting tastebuds with its slow roast pork or Portobello mushroom banh mi rolls and noodle salads, and Shaka Poke with its bowls of Hawaiian inspired goodness.

For a sweet treat after all that spice, there are “loaded” cheesecakes on offer from the the 2018 Dragons’ Den success story Pleesecakes, which brings its cheesecake concept to Dublin from London. The Pick ’n’ Mix comes topped with Haribos, sprinkles and sugar laces.

At the Baileys Treat Bar, all weather outcomes are catered for – they will be serving soft scoop ice-cream, in original and strawberries and cream flavours, as well as Baileys coffee. And at the Lindt Swiss chocolate stand you can see how truffles are made, and sample a few. Some of the products on sale there are exclusive to Taste of Dublin.

This year, Signature dishes are all pegged at €5, but there are also Icon menu items available from some participants which allow them to use more expensive ingredients. For the first time at this event, ticket holders will be able to pay with credit or debit cards, rather than the event’s on-site currency, the florin, which has been abandoned.

Best use of local and artisan produce: Grálinn