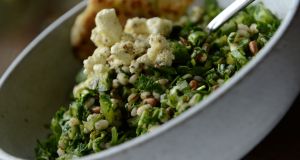 THERE’S SOMETHING VERY intoxicating about Middle Eastern cooking. It’s exotic in a way that Chinese or Indian food will never be. Arabian nights, souks, spices galore. Maybe it’s the classical romance of it all, or maybe I’m losing the plot entirely.

It is one of those books – not unlike the River Café books or anything from Claudia Roden – in which you have to dig a little and read through recipes, as opposed to just writing them off. Sometimes the recipes look either a little dull, or just too simple to be at all interesting. Sometimes they seem far too ambitious. But there are a bunch of interesting things to cook in here and lots of them are quite light and healthy.

We tried out this pearl barley salad and not only did it look fantastic, it was also zingy and fresh in that special way that using lots of herbs in salad brings.

We rarely think of herbs as having anything nutritional up their sleeves and they tend to be the glitter or perfume of dishes. But, in fact, parsley packs some serious nutritional punch. It’s high in folic acid, vitamin C and, because of its particular qualities and volatile oils, it is an anti-inflammatory food. We tend to think of it only in garnish terms, but in fact, it is much much more than that.

You will also see za’atar mentioned a lot through this book. It’s a spice blend made up of equal quantities of toasted sesame seeds, dried oregano, dried marjoram, ground sumac and a good pinch of salt. You can buy it in some speciality shops, but failing that, make you own by just add a good pinch of whatever of the above list you have, and don’t fret. There are plenty of good flavours here even if you just add a pinch or two of any of the above in lieu of store bought za’atar.

The flatbreads were from a Gordon Ramsay recipe. I am not much of a bread baker, so anything that doesn’t require lots of rising and proving is good in my books. This is just flour-based, no yeast is involved, so it’s a very quick undertaking and also deeply satisfying to produce. It is fried in a pan until lovely and brown and charred in places.

I could happily eat this type of meal every night: warm bread, simple salad and marinated cheese and can imagine this as part of a larger meal that would be ideal for a party.

The ricotta topping is fine if you aren’t serving the flatbreads with the barley salad. But if you were, then I would leave it off and serve the flatbreads on their own, as it would be cheese overkill.

Cook the barley in boiling water for about 30-35 minutes, until al dente. Drain, rinse it and then let it drain really well and set aside. Crumble up the feta or dice it and mix with the olive oil, za’atar, coriander seeds, garlic, cumin and some black pepper.

Chop up the parsley. In a large bowl, mix together with the barley, spring onions, pine nuts, green pepper, the allspice and lemon juice. Add vinegar to taste and some salt. Then add most of the olive oil that the feta has been marinating in and mix well.

Taste, serve and top with the feta or feel free to mix it through the salad.

LEEK FLATBREADS WITH LEMON AND THYME

To make the flatbreads, sauté the leeks in the butter and a bit of olive oil until very soft. You may want to do this with a lid on. Season them very well.

Put the flour in a bowl and add the water and the leeks and a bit more olive oil. Work this with a wooden spoon at first and when it comes together; use your hands to knead it for a few minutes. You may need to use some extra flour for patting them out flat onto a surface to prevent them sticking.

The first time I made this I added extra water thinking it was far too dry. But give it a minute or so as the leeks tend to carry quite a lot of moisture and it should be the right amount. Divide the dough into at least eight pieces, pat them out and then in a very hot, non-stick dry frying pan, fry them until they are starting to char and brown a bit. I sometimes add a bit of olive oil to the pan to help them along, but you want them to cook and lightly char.

You can keep them warm in an oven while you finish cooking the rest, or else just sprinkle with salt and serve straight away.

For the topping, simply mix all the ingredients together, season and spoon a little on top and serve.

Fish slices and spatulas are dead handy, but you need one suitable for non-stick pans and most plastic ones melt as soon as they touch the heat. Hence the brilliance of those from French brand Matfer, which don’t melt. Available in Sweeney O’Rourke’s on Pearse Street, Dublin 2. See sweeneyorourke.com

Fire your internal drill sergeant, it’s time to be kind to yourself
9