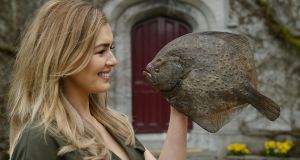 Innovators and experts in the areas of food, tourism and culture will converge on Galway next week for the second biennial touRRoir global forum, which is being staged at NUI Galway (NUIG) on April 23rd-24th. In the region of 300 delegates from 10 countries are expected to attend.

The Good Food Ireland initiative, which will run in partnership with The Irish Times, brings together key industry players for cross-sector dialogue around the theme A Unified Force for Good: Food Tourism Culture.

Galway has been chosen as the host location to mark the region as 2018 European Region of Gastronomy, its 2020 European City of Culture designation, and its pivotal location on the Wild Atlantic Way tourism trail. In 2016 the host city was Dublin and the venue was Croke Park.

A full day of panel discussions and interviews in the Bailey Allen Hall at the university on Tuesday is bookended by Monday night’s gala dinner, at which the 2018 inductees into the touRRoir Hall of Fame will be honoured, and by the closing showcase dinner.

According to Good Food Ireland, the hall of fame honours “the extraordinary achievements of individuals, teams or destinations anywhere in the world whose vision, creativity and drive had a positive and significant impact on the cross sector development of food, tourism and culture, for the long-term benefit of all stakeholders including consumers”.

Margaret Jeffares, managing director of Good Food Ireland, who will host the forum, said: “It is a great honour to induct to the touRRoir 2018 Hall of Fame such extraordinary individuals and teams from around the world, who have all made a significant impact on the cross sector development of food, tourism and culture. Having these distinguished guests at touRRoir to share their story is a great opportunity for industry and policymakers to learn at the highest level.”

The inaugural inductees were chef René Redzepi of NOMA, Copenhagen, the Catalan tourist board, and cultural anthropologist and food programme producer Lee-Wook Jung, from South Korea.

Inductees are selected by a panel of global food experts, including Colman Andrews, editorial director of TheDailyMeal.com, and author of The Country Cooking of Ireland, who will attend the forum. Andrews said: “One of the most important aspects of promoting collaboration in culinary tourism and culture around the world is the establishment of connections and the sharing of information across the globe. TouRRoir’s Hall of Fame honours individuals and organisations for themselves, but also places them prominently in the international spotlight, where others can take inspiration from them and share what they have learned.”

For Monday’s hall of fame gala dinner, which will be held in the university’s Aula Maxima, Irish chefs Tim O’Sullivan of Renvyle House and Killian Crowley from Aniar will cook alongside Swedish and Finnish chefs, Fia Gulliksson and Tarja Silvani.

Tuesday evening’s networking showcase dinner will see more than 40 chefs and food producers stage an interactive Irish food experience. Delegates will watch chefs cooking in front of them and will be able to interact with farmers, fishermen, butchers, bakers and cheesemakers, while sampling their products.

For more information, see tourroir.com. Registration for Tuesday’s talks, cultural activities, drinks reception and showcase dinner, will be accepted up until midnight on Monday, April 23rd, and the cost is €195 per person.

Irish beef: The Garden Room at The Merrion hotel, Dublin