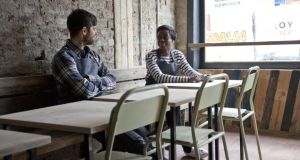 Jumoke Akintola and Peter Hogan have opened a restaurant and takeaway at 6 Queen Street in Smithfield, alongside the Luas tracks

There’s a real hunger these days for good bread, as growing interest in the Campaign for Real Bread bears out. The Baking Academy of Ireland’s Certificate in Professional Baking is a three week (15 day) intensive immersion in all aspects of baking, confectionery, chocolate work and sugar craft. The course, under the direction of master baker Derek O’Brien, former head of the National Baking School at DIT, is run at the Baking Academy of Ireland premises in Palmerstown Village, Dublin 20. They say it provides students with the “technical knowledge and hands-on skills needed to start a bakery business – a very strong statement. It costs €1,800 (€100 discount for paying in advance), and the next course is due to start on June 8th. See bakingacademyofireland.ie.

Jumoke Akintola and Peter Hogan have been drawing custom from all over Dublin for their fish and chips served from what is little more than a garden shed in Blackrock Market. This week they opened a restaurant and takeaway at 6 Queen Street in Smithfield, alongside the Luas tracks. This branch of Fish Shop has indoor and outdoor seating and will offer craft beers and wine by the glass (Muscadet, €3.50, Alsace riesling €5). Customers of the Blackrock outlet can rest easy, it will continue to open from April to October.

And the Blackrock market alumni continue to prosper, with James Sheridan and Soizic Humbert celebrating on two fronts, the birth of their son Cian, and their expansion into the former Grape Escape wine bar in the market. Canteen in the Market will continue to offer its sophisticated, good value set menu, while the wine bar, Canteen Wine, will offer small plates and interesting wines. April 19th is the opening date they are working towards for the wine bar. The couple has also started opening Canteen for weekend lunches, two courses €23 and three courses €26.

Back in Fish Shop, “lightly beer battered fish” will continue to be the mainstay of the new Smithfield menu, but there will be more scope for Akintola’s interesting sides and salads too. “We have extended our seafood offering to include dishes such as fried oysters and ceviche, and we daily specials will feature whole grilled fish,” Hogan says. The restaurant will open from noon to 10pm, Tuesday to Saturday, with Sunday opening at a later stage.

The Slow Food organisation has launched an initiative to take its ideals as well as its food to the European Parliament in Brussels. Once a week, until the middle of June, the menu at the Parliament will feature a dish made with ingredients that are local, seasonal and farmed responsibly, following a Slow Food recipe. In addition, tasting sessions highlighting food products that are in danger of extinction are being staged in the Parliament.