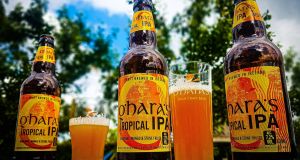 O’Hara’s was established 24 years ago, making it one of the very first craft breweries in Ireland. It remains one of the largest and most successful. It has just released a new beer, the Tropical IPA.

“The focus is all on hop character and the tropical flavours and aromas that particular hops produce: orange, citrus, mango and peach,” Seamus O’Hara says. “You also get some flavour from the yeast – it is unfiltered and murky because that holds the flavour better. Unlike many IPAs, it has a low bitterness and is light on malt too. We used late hopping for those fruity flavours.

“At 7.2 per cent, you won’t knock it back; it is a sipping beer, a food beer that goes really well with salads. I tried a trial batch with an Indian takeaway and it worked really well.”

At home I tried it out with a plate of hard cheeses, pickles and chutneys, as well as a lamb biryani; it was great with both, picking up the fruits in each.

O’Hara’s also has two pubs, Beer Corner in Kilkenny and Urban Brewing in Dublin’s CHQ. “Urban opened straight away. It has a big focus on food anyway, and plenty of outdoor space, so we are well-spaced to accept people in terms of the new regs,” says O’Hara. “It was busy on the first weekend, and we are very happy. Kilkenny will open soon.

“Pre-lockdown we were 50-50 on and off-trade. Obviously the on-trade was a big blow, but the off-trade has been really strong. The future will be really choppy, with a lot of uncertainty for some time to come. We thought export would die a complete death but, while the off-trade channels declined, they did stay open, even in Italy. Every market is now starting to open up again. There will be difficult moments and we’ll have to see how things go.”

O’Hara’s is also releasing its 3.8 per cent Session IPA, very successful on draught, in bottle for the first time. It has also opened radicaldrinks.com, an online store. All of their beers, plus some partner beers from Ireland and abroad, are available.

The trained GP who can’t work in Ireland, despite the shortage
10

How can I tell my husband it is over and I want a divorce?
Real news has value SUBSCRIBE