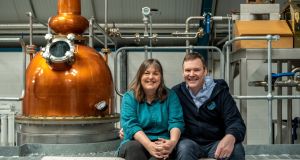 Sliabh Liag founders Moira Doherty and James Doherty: ‘Our gin is different, and savoury. It is not a pretty, sweet gin. It polarises, but a lot of people really like it.’

Sliabh Liag, the Donegal distillers, do things a little differently. The company’s An Dúlamán Gin is made from locally harvested seaweeds and six other botanicals. It is full of delicious saline umami as well as juniper. “Our gin is different, and savoury. It is not a pretty, sweet gin. It polarises, but a lot of people really like it,” says co-founder Moira Doherty.

“Moira has developed the knack of getting the maritime element without any earthy, or fishy flavours,” James Doherty, her husband and business partner, adds. “It is a breath of sea air rather than a slap in the face.” They also produce Assaranca Vodka, infused with rowan berries and gorse flowers as well as two whiskies.

James is the grandson of a renowned Donegal poitín man. He and Moira relocated here to create the first distillery in Donegal for more than 175 years. James had a long career in the spirits business, and the couple often talked about how they would like to do something braver.

“My mum left Donegal in the late 1960s and it has always been my happy place, the place I wanted to go to. Donegal had a rich illicit distilling heritage and yet there were no distilleries here,” he says.

“The reaction to Silkie has been superb,” he says, speaking about their first whiskey. “ It is all about the way the blend tastes, but we use about two per cent triple distilled peat giving it a hint of smoke.”

The latest release, Dark Silkie, is profoundly smoky. “It has the aromas of my grandfather’s pipe. It is the one we always wanted to make, but couldn’t source the right whiskies.”

The couple have been busy with things other than spirits distilling during the coronavirus crisis. Moira, formerly a nurse in Zimbabwe, knew that sanitiser can be tough on the skin, and so made one using seaweed. Now, 1,250 litres have been donated to Donegal Hospital.

Following on from planning problems they encountered expanding the existing distillery in Carrick, work on the new distillery and visitor centre in Ardara in the Donegal Gaeltacht has commenced, although delayed by the virus. In the meantime, you can buy their products online or in specialist retailers.