Alcohol-free wine is improving, and there are some appetising low-alcohol craft beers 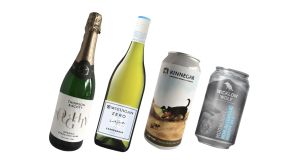 The range of low- and no-alcohol drinks continues to expand, and the quality is improving, too. Sadly, Ireland is still not always an easy place to be seen to be avoiding a drink, but once a glass of beer or wine is poured, nobody will know that you are drinking the alcohol-free version.

The best alcohol-free wines are made from real wine that has had the alcohol removed. There are various methods, the most popular being the spinning cone that gradually removes alcohol at low temperatures, theoretically without harming the flavour element. Most producers then add grape juice or sugar, to add the texture and mouthfeel that alcohol provides.

Torres were first off the mark, releasing the Natureo white in 2007, which is still one of the best. I tasted my way through a range of alcohol-free wines from the various supermarkets. Many had wet cardboard or earthy aromas, although most had plenty of fruit on the palate.

In general the white wines were better than the reds, and the sparkling wines were best of all. As well as the Noughty featured here, the sweetish Prosecco-like Nosecco (€3.93) and Legero (€6.89), from Cava producer Freixenet, are good.

Both Australian producer McGuigan and German winemaker Leitz believe that the key to success lies in using high-quality wine as a base. Leitz, which makes the Eins Zwei Zero range, owns vineyards in some of the most prestigious sites in the Rheingau, although I doubt these produce wine for Eins Zwei Zero. These two producers make some of the best alcohol-free wines. Eins Zwei Zero is widely available through independents.

Guinness was following Heineken and many other mainstream beer producers, including Carlsberg, Peroni, Becks and Erdinger, all of which have an alcohol-free option. I blind-tasted Heineken and Guinness (prior to recall) against their alcohol-free counterparts and they tasted remarkably similar. The Guinness 0.0 had those genuine bitter roasted coffee flavours, and the Heineken 0.0 tasted very like Heineken always does.

However, my favourites were from local craft beer and cider producers. The two beers featured here, as well as Dungarvan Main Sail and Highbank Driver Cider, are all excellent alternative to any alcoholic drink.

As well as alcohol-free beers, I have been enjoying a number of low-alcohol beers, including Whiplash Northern Lights Micro IPA (2.8%) and Metalman Super Session IPA (2.5%). Don’t worry if your beer or wine is 0.4% or 0.5% alcohol; these are effectively alcohol-free. A great many orange juices, breads and cheeses have similar trace amounts of alcohol.

Wicklow Wolf Midnight Non-alcoholic Hoppy Ale
0.5%, €2.71 or 4 for €10
This has a big hit of refreshing citrus hops balanced by a nicely fruity finish. An appetising beer you could drink all night.
From Widely available from independents and SuperValu, supervalu.ie