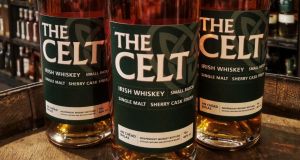 “So far, we have done 29 single cask releases and will launch more before Christmas, including one aged in a wine cask,” says Ally Alpine, founder and owner of Celtic Whiskey.

This is the first in a new series of small batch releases called The Celt Irish Whiskey, An Chéad Bhlás (or First Taste). The difference this time is Celtic is looking to produce a high-quality whiskey that doesn’t cost the earth.

Unlike previous releases, there is no information on the distilleries responsible for the original whiskey, no statement of age and no bottling date. “Some people are really not interested in all of this, hence the small batch. We don’t want it to be compared with anything and we don’t want one upmanship against the distillery’s own whiskey.

“We simply wanted to do a really good whiskey for people to enjoy. We have annoyed some people because we won’t tell them, but customers are really enjoying it. It is for people who like a sherry whiskey, packed with sweet dried fruits and spice. It is 46 per cent but the alcohol is in the background. I am very happy with it”.

An Chéad Bhlás will be sold exclusively through the Celtic Whiskey Shop, The Celtic Whiskey Bar & Larder in Killarney, and celticwhiskeyshop.com at €75 per bottle. Some €5 from every bottle sold will be donated to Down Syndrome Dublin.

Teeling Whiskey has also released a new whiskey, the Renaissance Part Two. This follows on from the highly successful Part One, released last year, which took Gold at the 2020 Irish Whiskey Master and 2020 International Wine and Spirits Competition. Some 9,000 bottles were produced.

It is an 18-year-old single malt finished in ex-Australian Shiraz wine casks. Not surprisingly, this gives it a very attractive fruity edge – ripe plums and black cherries, as well as a spicy touch. The whiskey, which comes in a decanter and gift box sells for €140.