Ballyvolane’s Navy Strength gin, at 57.1%, dials up the spices and includes fresh citrus 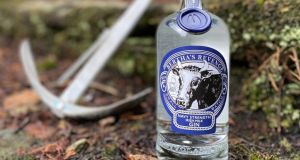 Gin lovers will be familiar with Bertha’s Revenge Small Batch gin, produced by Ballyvolane House Spirits Company near Fermoy, Co Cork. It is made with whey sourced from local dairy farmers and named in honour of Bertha, once believed to be the world’s oldest cow, who passed away at the venerable age of 48.

Ballyvolane has now released Bertha’s Revenge Navy Strength gin, which comes in at a powerful 57.1 per cent ABV. Navy-strength gin, typically around 57 per cent, was doled out every day by the British royal navy to sailors, along with rum, a practice that continued until 1970.

According to Justin Green of Ballyvolane Spirits, more than a quarter of the royal navy’s sailors were Irish during the Napoleonic wars, including vice-admiral Sylverius Moriarty, an ancestor of Green’s, reputed to be the only Irish-speaking vice-admiral serving in the navy. It seems likely that the Irish contingent had the odd tot of navy-strength gin while serving.

The Navy Strength gin has more botanicals too. “It is the same mix as our regular – still very juniper – but we have dialled up the amount of spices a bit, the cardamon, cinnamon and cumin, and used fresh citrus – we are delighted with that,” Green says.

As well as the regular gin, Ballyvolane makes a seasonal sloe gin that usually sells out around Christmas. They have also been working on a crab apple gin for the past seven months. “We have some on the estate, and David Keane in nearby Cappoquin has some too. I think it is the first time he has found a market for them. We steeped the apples in the gin for seven months and then added one part cane sugar to six parts gin; using cane sugar gives it a lovely caramel flavour.”

Bertha’s Navy Strength is a powerful, full-flavoured gin that can be enjoyed solo with ice, although mixologists favour it for many cocktails. It is available in 50cl bottles for €42 from ballyvolanespirits.ie and specialist spirit retailers.