Get your beers sorted for Christmas 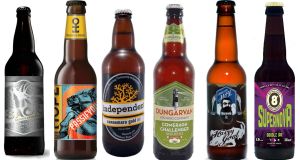 Fine Irish offerings: it’s good to have a selection of styles and strengths to keep all your guests happy

“Drink less, drink better,” is a well-worn phrase of Belgian brewers and it’s a good one to think about as we head into the busy party season. There are many great craft beers out there and with a growing number of new microbreweries opening up around the country, it can be hard knowing where to start. It’s a good idea to stock up on a few different styles, from blonde ales to stouts, with different levels of strengths and bitterness, so you can cover all tastes and keep your guests happy.

Session beers are perfect for parties, and there’s plenty of them on the shelves these days. Not too strong in bitterness or flavour, a good session beer will have the right amount of balance and depth to keep you interested but is not too high in alcohol so you can have more than one. Craft lagers and light pale ales are good for parties too, especially if your guests are not used to the more intense or hop-dominant craft beers. Throw in one or two special treat beers for beside the fire, and your beer fridge is sorted.

Independent Brewery is based in the Connemara Gaeltacht and its Connemara Gold Ale is the perfect session beer. It’s light, delicately hopped and comes in at 4.5%.

Mountain Man’s Hairy Goat is an English-style India Pale Ale with a medium bitterness and a good grapefruit aroma and at 4.5% makes for easy - and tasty - drinking.

Boom is made by Dublin brewers StoneBarrell and its Session IPA is one of the best around. This India Pale Ale is for someone who likes a hoppy beer. It’s got a delicious fresh aroma with a bright solid bitterness and crisp body at 4.5%.

If you have guests who are used to more mainstream beer styles, try a craft lager. Cork brewer Cotton Ball does a fantastic pilsner called Mayfield 5. Eight Degrees Barefoot Bohemian pilsner is also worth a try.

PassifYouCan by Hope Beer is another of my favourites - this is a tasty light blonde ale with a summery tropical fruit zing.

Cans are handy and compact for packed fridges during the Christmas season. Try Rascals Yankee White IPA - this has citrus and peach aroma with a light and refreshing but soft body. Kinsale’s KPA is another handy party beer and also comes in cans.

O’Hara’s in Carlow was one of the first Irish microbreweries on the scene and this year it celebrated its 20th anniversary. To mark the event, it brewed a special 10% Imperial Stout. This is a rich, sipping beer with chocolate, coffee and a smooth warm finish.

Mescan Brewery is based in the foothills of Croagh Patrick in Co Mayo. Its beers have a distinctly Belgian influence (one of the brewers is Flemish) and the Mescan Red Tripel is an 8% Belgian strong ale with red berry and malty caramel flavours.

Cork’s Eight Degrees Brewing, which is run by an Australian and a Kiwi, have plenty of great beers on the market. Its Supernova Double IPA is dry-hopped with Simcoe, Amarillo and Enigma, and you’ll get piney and passionfruit flavour with a malty backbone. It’s a big beer at 8%, with full-on bitterness and complexity.

Saor is golden pale ale and comes from deep in the Cork Gaeltacht, made by 9 White Deer brewery. Finely balanced, it’s got a crisp and light body with lager-like qualities at 4.5%.

Waterford brewery Dungarvan does an Irish bitter called Comeragh Challenger. This is a delicate ale with a touch of floral hops and a malty base at 3.9% - worth a try also for the gluten-tolerant.

There’s been huge growth in Irish cider production over the last few years - here are two worth trying:

Scotts Irish Cider is medium-dry with a sweet apple aroma and flavour. It’s got a round and full-bodied finish, and you’ll get apple skin complexity and a hint of smokiness. 5% (makes a heavenly pairing with a creamy Camembert).