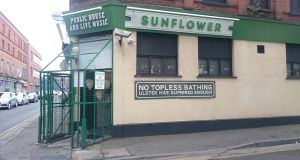 The Sunflower bar in Belfast has a great range of local beers, including Yardsman stout by Hercules Brewing

Yardsman Original Double Stout is a tasty, classic dry Irish stout made by Belfast’s Hercules Brewing Company. It’s one of the many local beers at the Sunflower, including Hilden, Northbound and Farmageddon. Photograph: Stephen Hamilton, Press Eye

There’s a cage around the entrance of the Sunflower bar in Belfast – a remnant from Troubled times – and a sign on the side of the building that reads: “No topless sunbathing, Ulster has suffered enough.”

Inside, it’s surprisingly cosy with a kind of warm authenticity that you don’t find too often these days, probably something to do with the fact that there’s been a bar in this spot for more than 100 years.

In December last year, this iconic Belfast pub announced that it was removing its mainstream beers on tap to increase its local offerings.

Most of the pubs in Northern Ireland are “tied” with long-term exclusivity contracts to big breweries which means products from microbreweries are minimal or limited to bottles.

When I visited, on a quiet Friday afternoon a day after the announcement, an awkward moment occurred when a local approached the bar asking for a pint of well-known stout.

The barman explained that they didn’t serve that particular brand anymore and offered him their new Yardsman stout on draught.

The man said nothing for a moment then shrugged his shoulders. “Well I’m here now,” he grumbled, sitting down. (He drank the entire pint in two mouthfuls.)

Yardsman Original Double Stout is a tasty, classic dry Irish stout made by Belfast’s Hercules Brewing Company. It’s one of the many local beers at the Sunflower, including Hilden, Northbound and Farmageddon.

Hercules was the first microbrewery to be founded in Belfast 160 years (in the 1800s there were 13 breweries operating in the city). It is located in the port area, home to the modern Titanic quarter and the majestic Harland and Wolf cranes. Their Yardsman beers include the very sessionable Belfast Pale Ale.

Founder Niall McMullan has 25 years’ experience working in the drinks business. “Up here, we’re about two years behind Dublin in craft beer.”