Donal Skehan: The only fried chicken recipe you’ll ever need

This recipe for hot, spicy wings is a winner straight from Koreatown 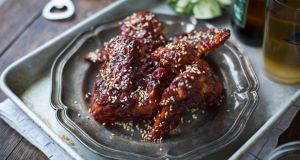 It’s easy to see why Korean barbecue restaurants have become a staple of the LA food scene.

“Slight right on to West Olympic Boulevard, your destination will be on the left,” my GPS barks at me as I take a sharp right on a red light careering across three lanes of Los Angeles traffic. After weeks of driving in America, my wife Sofie has relinquished the reins.

With meetings and work to go to, I’m in the driving seat, with nail-biting results. This particularly traumatic evening in the heart of Koreatown, we were on the hunt for authentic Korean barbecue and were tracking down a restaurant called Sun Ha Jung, famous for its duck.

It’s easy to see why Korean barbecue restaurants have become a staple of the LA food scene. Groups of diners huddle around rows of tables with a smoking grill plate at the centre of them. Chopsticks are poised at the ready while huge plates of meat are cooked right under your nose – sizzling and smokey.

Waiters stop by to tend to the pan and drop off banchan, small side dishes of kimchi (pickled cabbage), daikon (radish), pickled bean sprouts, ssam (salad greens) and bowls of spicy kimchi broth. Drinks are served in an oversized school lunchbox-style plastic beaker. They are sweet and can be spiked with Soju, a rice vodka. 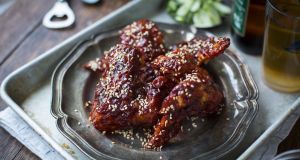 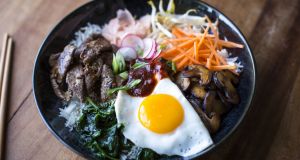 If you’ve chosen the right spot, the meal will lead on to the much celebrated Korean pastime of karaoke. Who doesn’t love belting out a Celine Dion classic with a belly full of barbecued meat?

Our arrival at Sun Ha Jung was heralded by the entire restaurant swinging their heads around to see who the foreigners were. We were seated by a waitress with limited English, but who clearly knew her stuff.

Within a few minutes, the hot plate was fired up and there were platters of thinly sliced duck being piled on. Surrounded by groups of chattering Korean friends and families, we quickly went unnoticed as we tucked in to this feast for two.

A few weeks before this old-fashioned duck hunt, we’d had a completely different experience in our first taste of Korean barbecue at recently-opened restaurant Hanjip, in Culver City in Los Angeles County.

This modern, sleek and sophisticated take on the traditional KTown BBQ joint is being hailed as revolutionary, in a saturated market.

With its selection of thinly cut marinated meats and sides, such as Korean fried chicken and kimchi fried rice sautéed in brown butter with a poached egg and seaweed, it’s easy to see its appeal.

Whether you choose to go modern or traditional, KTown is a treat. Here are two recipes for Korean favourites – Bibimbap is considered the unofficial national dish – and should ease you in.

The Kerryman working for a charity in Melbourne: 'It's a challenging time'
Real news has value SUBSCRIBE