Most of us enjoy an occasional sweet treat, and what we choose as our indulgence is important 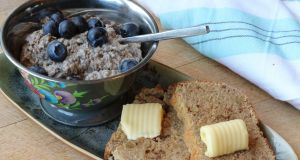 Bananas the star of my first recipe, a banana bread that is gluten-free and which, along with coconut sugar, contains all the goodness of four bananas. Photograph: Nick Bradshaw

I t’s no secret that my food has veered firmly into healthier territory over the past few years, but that doesn’t mean that my sweet tooth doesn’t very occasionally get the upper hand.

And I know I’m not alone. Judging by correspondence from readers, there are plenty among you who want something sweet from time to time (or, ahem, more often), and you also want that something to be as healthy as possible.

Nutritionally though, it’s rather a different picture. You can’t compare a banana to a chocolate bar any more than you can compare Madonna and Adele. Sure, they’re both singers, but they do wildly different things.

So when you’re thinking about eating something sweet, it’s great to make it as nutritious as possible.

At least that way, any guilt you might feel (and I don’t really believe in guilt when it comes to food) will be balanced by the knowledge that alongside that sugar, you’ve also consumed some goodness.

There’s a reason I mention bananas, because they’re the star of my first recipe, a banana bread that is gluten-free and which, along with coconut sugar, contains all the goodness of four bananas. That means lots of the mineral potassium, which is great for your cardiovascular system.

There’s more, too. We’ve always known there is something strangely soothing about bananas, and that’s because the sticky carbs they contain seem to soothe inflamed surfaces within the gastro-intestinal tract, making them a great remedy for issues such as gastritis.

This banana bread is absolutely delicious warm, sliced and laden with a cool slab of butter. Yes, butter. The bread is so full of nuts and oils that it is quite filling and you won’t want more than one slice anyway, so go on, indulge if you want. I promise not to judge.

It is a great way to use up fruit that has gone just that bit too ripe.

The second recipe is for a porridge made from chia seeds, which are the seeds of a flowering plant from the mint family. Chia seeds are nutrient power houses, but apart from adding them to things, it can be hard to find ways to eat them.

This porridge is the sort of thing you might have for breakfast instead of, say, pancakes. The dates sweeten it, and the tahini, though a little odd sounding, gives it a great sweet-savoury balance.

Paul Flynn: ‘I still have all my old menus. One dish stands out: bang bang chicken’
6

Seán Moncrieff: Meh is the most sensible feeling in ‘these difficult times’
Real news has value SUBSCRIBE