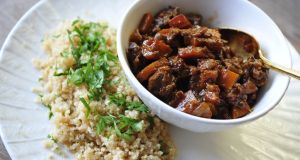 I’m very partial to a richly flavoured, meaty stew, and the more tender and mouth-watering it is, the better. Photograph: Aidan Crawley

‘Practice makes perfect.” It’s a phrase all of us will recognise. And according to a poll by a British tabloid, it’s also the phrase we’re most likely to continue to use as we get older, so our poor kids will have to hear it too!

But this slightly patronising little nugget is also irritatingly true. When it comes to cooking, at least, there is nothing – nothing – to beat practice.

With the right guidance and tools, I believe cooking is a skill that anyone can learn, and improve at, even if they feel they’re starting from zero because their mum (and chances are it was their mum) was crap in the kitchen and they never got further than burning the toast.

But I also believe you can’t let your failures in the kitchen – and we all have them – stop you. You just have to keep slogging away.

And just like learning a new language, it doesn’t matter if sometimes you feel you are making an eejit of yourself in the process. It’s all a means to an end, see, because at some point, all that practice will produce some degree of proficiency.

Depending on effort and God-given talent – mostly effort, though – your skill level might be merely competent or highly proficient.

But most of us just want to be able to prepare decent, nutritious food most of the time, and keep the fancier stuff for special occasions when we can up our game. So, practice your techniques and try out recipes, ingredients and flavours and your confidence and skills will grow.

One dish that I’ve produced recipes for year in year out, is the stew. I’m very partial to a richly flavoured, meaty stew, and the more tender and mouth-watering it is, the better.

It also helps that anything cooked in one pot means less washing up.

So I am very happy to keep practicing my stew-making skills, and trying out new recipes whenever I get a chance, but especially in winter. It’s my hibernation food.

This beef stew is “dirty” in the sense we Irish use the word – with something of a diamond-in-the-rough quality to it, thanks to copious red wine and a hint of cinnamon. It takes about 10 minutes to get going, and then you can leave it be for two hours or so, until it all amalgamates nicely.

And because it’s the way I’m tending to go these days – that is, low carb – to go with it here is a simple celeriac ‘rice’ cooked in just a little butter and water.

Nigel Slater: ‘I’m happy, but I’ve only just realised it’
9