Dine like lords and ladies just for one night 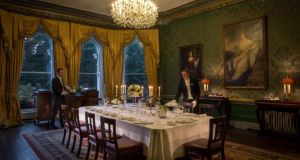 The Constitution Room at The Shelbourne hotel 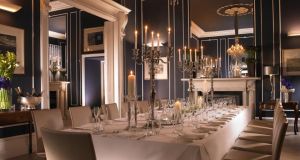 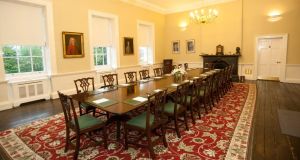 You have had an enjoyable night with friends eating forgettable food and shouting over the din of a packed restaurant. There have been lengthy lulls between courses. At the end of the evening, a crowd in Christmas jumpers begins to murder Oh Holy Night. Someone at your table divvies up the bill on their phone.

Cramming in with the madding crowd is one of the joys of eating out in party season. But how about dinner in a private dining room where you have the place all to yourselves? We have found some special rooms, a few of them in unexpected venues, from candlelit country houses to a modern art gallery, an enormous table in a former convent boarding school, a Georgian townhouse, an Asian karaoke bar, or the boardroom of a former poor house.

Throwing a bespoke gathering like a bunch of trust fund luvvies from the 1990s movie Peter’s Friends isn’t cheap – nor is it as expensive as you might think. And the value outside Dublin will knock your Christmas socks off.

The Constitution Room at
The Shelbourne Hotel
The panto stage isn’t the only place you will find a footman in Dublin these days. (Oh no it isn’t). There are two white-gloved and waistcoated footmen who attend to diners in the Shelbourne’s Constitution Room, the smallest of the hotel’s private dining rooms.

A basic price of €85 per person covers the beautiful room with Vera Wang porcelain, flowers, silver candelabra and footmen. It also gets you the basic food package of canapes, a soup amuse bouche and three courses.

A drafter’s eye for detail is needed to figure out the final cost, however, as there’s a 15 per cent service charge bringing it up to €97.75 a head.

This will be the cost if you all plump for the “copper-roasted corn-fed chicken breast, broth of greens, bacon and spring onion” as a main course. A lamb main course will bring it up to €126.50 and a Lambay lobster main is the priciest at €165 a head. Finally, you will need to get a consensus from your committee of diners on the courses to avoid supplement charges for the dissenters.
The Shelbourne Hotel, St Stephen’s Green, Dublin 2, tel: 01-663 4500

Chef James Doyle does the cooking in both venues. The restored dining rooms, named after famous Dublin architects and craftsmen, can seat between eight and 66 people. Menus start at €90 a head, including service charge. A typical menu might include a starter of fried mullet and shellfish, a herb-crusted loin of Wicklow lamb (for €5 extra) and a dessert of rhubarb and ginger creme brûlée.
No 25 Fitzwilliam Place, Dublin 2, tel: 01-669 4646

Ukiyo karaoke
If you prefer singing to blinging, you and your friends could hire the Asian restaurant and karaoke bar Ukiyo on Dublin’s Exchequer Street for the night. It’s an option for a larger group of between 35 and 40 people. They have set menu options for between €45 and €55 a head.

After eating in the ground floor restaurant your group can retire to the basement karaoke booths for a singing session.
Ukiyo 9 Exchequer St, Dublin 2, tel: 01-633 4071

Ballinderry House
Ballinderry House west of Ballinasloe in Co Galway is described by its owners not as a country house but as a “small private family home” that takes guests.

The dining room is painted deep blue and filled with 17th and 18th century furniture. The dinner table is set with antique silver and rococo porcelain. Your food is cooked by the man of the house, George Gossip, who likes to cook with ingredients from local producers and from his own farm and garden. Dinner is a fixed menu for €55 a head for between eight and 12 people. The house has four double guest rooms if you want to make a night of it.

Roundwood House
The study in Hannah and Paddy Flynn’s Roundwood House in Mountrath, Co Laois can seat up to 12 people, with space for up to 30 people in the dining room.

You can get a sense of the people behind this house in Paddy’s lovely occasional blog postings about life as a young couple working to run the house and cottages in the grounds. They serve five courses for €50 a head and three for €35. If you want to stay, the room rate is €70 a head.

The Tannery
Up to 18 people can sit around Paul and Máire Flynn’s huge dining table in their cookery school dining room in Dungarvan, Co Waterford. The gorgeous room, off the large white space that is the cookery school in the former convent boarding school, has sash windows looking out onto the streets of the town. A minimum of 14 people can book the chef’s table in the cookery school and the menu costs €60.50 a head including service. Guests get a choice of meat or fish antipasti, a cod, duck, roast rib of beef or a vegetarian main and a choice of three different desserts or cheese.

Another private dining room in the restaurant can be booked for the group menu which comes in at €40 a head, (or €44 for groups of six or more people).

This menu includes such dishes as Flynn’s signature crab creme brûlée with dillisk toast, fish of the day with sweetcorn and hazelnut risotto and chocolate mousse with clementine panna cotta to finish.
The Tannery Restaurant, Townhouse and Cookery School Dungarvan, Co Waterford tel: 058-45420

Clifton House
Clifton House on Belfast’s North Queen Street was designed in the late 18th century as Belfast’s poorhouse. Children in the poorhouse were taught industrial skills such as cotton spinning and weaving, making it one of the cradles of the north’s linen industry. The building, which resembles a US settler house, has been fully restored and they host private dinners in the boardroom for groups of at least 24 people and a maximum of 60. They will design a menu around your budget and prices start at £35 (€40) for three courses.
Clifton House, North Queen Street, Belfast, tel: 00-44-28-9089 7534

Ballyvolane House
A blazing fire and candlelight greet diners when they arrive for private dining at Ballyvolane House outside Fermoy in Co Cork. The dining room can seat up to 12 people and they have room for larger groups elsewhere. A typical menu choice for the €55 a head dinner menu might be a warm potato and Gubbeen chorizo salad, confit of barbary duck with lentils, and a gooey chocolate pudding for dessert. According to owner Justin Green, the eating can be followed by a sing-song around the piano.

“We provide song sheets so there are no excuses about not knowing the words,” he says, adding that Fairy Tale of New York is a firm favourite as well as the Twelve Days of Christmas “with all the actions”. They can also arrange bus transport to and from the house.
Ballyvolane House, Castlelyons, Fermoy, Co Cork, tel: 025-36349