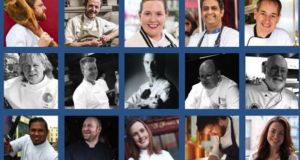 If you’ve ever wondered what it was like to dine on roast quail and chateaubriand in the rarified surroundings of Le Coq Hardi, former taoiseach Charlie Haughey’s favourite Dublin restaurant, then wonder no more. For one night only, “the Coq” is coming back.

On July 18th, the five will be cooking in the restaurant’s original kitchen, and will serve their interpretations of dishes from Le Coq Hardi’s menu. Although the restaurant is no longer open, the current owner of the building, Morgan Wine Merchant Ltd, retained the kitchen and diningroom and use the space for private dining events. John Howard and food writer John McKenna will deliver an introductory speech.

The pop-up dinner is one of three events being organised to celebrate the 30th anniversary of the establishment of the Irish branch of Euro-Toques, the international group known as the “community of chefs and cooks”. Tickets have just gone on sale, and the Le Coq Hardi dinner is selling fast, despite its €150 ticket price.

“The Euro-Toques Series will include three pop-ups – one for every decade of Euro-Toques – each celebrating the chefs, the produce and the diversity of the culinary scene today,” says Euro-Toques secretary-general Caroline Byrne.

The third pop-up dinner will take place in Dublin on July 25th, at a venue to be confirmed, when bacon and cabbage will be given a contemporary twist by Sham Hanifa (The Cottage, Co Leitrim), Kevin O’Toole (Chameleon), Kate Lawlor (Fenn’s Quay), Robbie Krawczyk (Tankardstown House) and Ali Honour (Ali’s Kitchen).

The five-course dinner at Luna, with an introduction by food and wine writer Ernie Whalley costs €65 and can be booked now at euro-toques.ie/join-us/euro-toques-dinner-series-night-one-luna. The bacon and cabbage and craft beer dinner, with an introduction by pork and bacon specialist Ed Hick, will cost €55 and the link to purchase tickets is euro-toques.ie/join-us/euro-toques-dinner-series-bacon-cabbage-night

There are only a few tickets left for the Le Coq Hardi dinner, and they can be booked by contacting Euro-Toques Ireland, tel: 01-6779995.