Davy Byrnes, immortalised by Joyce in ‘Ulysses’, for sale at €6m

Famous Dublin pub, on Duke Street, is the go-to watering hole on Bloomsday 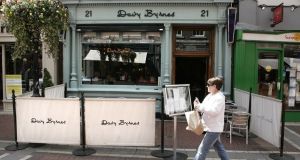 Another bit of dear dirty Dublin, as James Joyce had it, is set for change. Davy Byrnes, the landmark pub on Duke Street, beloved of Leopold Bloom, of students and politicians and other such chancers, of business types, artists and highfalutin ladies, where a fellow might get a cheque cashed if he was lucky, is up for sale.

A moral pub, wrote Joyce, as if such a thing were possible, when he planted Bloom there on that famous day in Dublin that he immortalised in Ulysses. “He entered Davy Byrnes, ” Joyce wrote of his wanderer. “Moral pub. He doesn’t chat. Stands a drink now and then. But in a leap year once in four. Cashed a cheque for me once.”

And in his wonderful, colourful, vivid way, the author painted his picture in words.“Davy Byrne came forward from the hindbar in tuckstitched shirtsleeves, cleaning his lips with two wipes of his napkin. Herring’s blush. Whose smile upon each feature plays with such and such replete. Too much fat on the parsnips.

“And here’s himself and pepper on him, Nosey Flynn said. Can you give us a good one for the Gold Cup?

“I’m off that, Mr Flynn, Davy Byrne answered. I never put anything on a horse.

Strictly speaking, the name over the door, writ large in neat, flowing script, should be Davy Byrne’s, given that it was the premises of Mr Byrne, and not one of a pair. But as the apostrophe was absent from Ulysses, subsequent custodians thought better of correcting Joyce.

Davy Byrne, who came from Wicklow and opened the pub in 1889, hung up his apron in 1939. By then it had earned its place in history (quite apart from its place in literature). The guerrilla leader Michael Collins and Arthur Griffith, the pro-monarchy founder of Sinn Féin, met there frequently, as did the provisional cabinet. According to the pub’s account of its own history, “an officious barman clearing the premises at closing called, ‘Time, gentlemen please,’ to which one customer replied, ‘Time be damned! The government is sitting upstairs.’ ”

In 1942 it was acquired by the Doran family of Marlborough Street, father and three sons turning it into what it is today. “It’s one of those iconic pubs of Dublin,” says its manager Redmond Doran, one of the three, who are all now in their 70s. “Everyone knows it because it’s always been at the centre of things happening in Dublin.”

Selling Davy Byrnes Ltd, and the 900-year lease that goes with 21 Duke Street (offers in excess of €6 million to John P Younge of Lower Pembroke Street) was always going to be a bit of a wrench, but the time had come, as none of the next generation was in the business.

There’s a beer-, wine- and spirit-filled basement and that famous walk-in ground-floor bar. The first floor is given over to staff rooms and kitchens. What looks from Duke Street like a second floor is actually a fake facade: there is none. But there is a flat-roofed lounge extension at the back and, to suit current taste, pavement seating on Duke Street. Also in keeping with contemporary demands, food is a very significant part of the business now – oysters and Guinness and lots of fish. Pheasant will be back on the menu any day.

The place is a thriving business and a go-to destination every June 16th. Bloom would surely be happy, on his or any other day, munching away on his Gorgonzola sandwich washed down with a glass of burgundy.

“Mr Bloom ate his strips of sandwich, fresh clean bread, with relish of disgust, pungent mustard, the feety savour of green cheese. Sips of his wine soothed his palate. Not logwood that. Tastes fuller this weather with the chill off.

“Nice quiet bar. Nice piece of wood in that counter. Nicely planed. Like the way it curves there.”