Food File: Ely extends to Kildare, veg out at Body & Soul and Ballymaloe gets into mayo 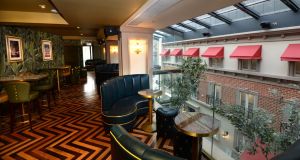 Cocktail drinkers may have Dublin bar Café en Seine in their sights in the coming days as the Dawson Street venue hosts two seasonal events. It was world cucumber day on Thursday and to mark the occasion Hendrick’s gin is taking up residency with its Curious Cucumber Hatchery, a performance art experience that continues until June 3rd.

Executive chef Stephen Gibson has created a sharing plate for the Hatchery and there will also be Hendrick’s cocktails to sample. A giant aviary, a walking bar, and a “multidimensional cocktail creator which patrons can use to mix their own drink” are also part of the experience.

The following day, the cucumbers and gin move on and make way for the arrival of Nine Lives, the London establishment that features in the World’s Top 50 Bars. Based in a Victorian basement in Bermondsey, the cocktail menu at Nine Lives reinvents the classics, creatively using a range of ingredients.

On Tuesday, June 4th, from 7pm, the Nine Lives mixologists and the Café en Seine team will go head-to-head, each creating three cocktails which will be on offer for one night only upstairs at the Parisian Street bar.

Ely has extended its operations beyond Dublin, with the opening of its fourth wine and food outlet, in Maynooth, Co Kildare. The new addition, called Ely Wine Store, has a shop stocking more than 350 wines, as well as oils, vinegars, cheeses and charcuterie, in addition to a wine bar serving lunch, brunch and dinner. Sharing plates and snacks are a big part of the offering, but the Ely burger, 28-day dry-aged sirloin, and a market-led fish option are also on the menu.

The Maynooth site is an old stone building at Convent Lane that has been redesigned by Eavan English of EEDI Studio Design, also responsible for the recent revamp of the original Ely on Ely Place in Dublin 2. The other branches are Ely bar and grill in the IFSC, Dublin 1, and Ely64 in Glasthule on Dublin’s southside.

The new edition of barrel-aged hot sauce from Rebel Chilli in Cork is being launched at the Bloom festival in Phoenix Park this weekend. It is aged for 62 days in whiskey barrels from West Cork Distillers in Skibbereen, and this is the second time the condiment company has released a product of this type. Last year the company made 900 bottles, and production has increased to 3,000 this time around.

“It’s great that we were able to source the barrels so close to home, and I think it makes the product even more unique. It has a sweetness to it and a lovely whiskey finish, without being too hot. It’s great over eggs, hummus, or in a sandwich. We think it’s the best sauce we’ve made, so we have high hopes for it,” says Rebel Chilli founder Paul Moore.

“We’ve learned from our first experience with the barrels and have tweaked the recipe slightly, so the result is slightly hotter, sweeter and has a stronger whiskey flavour.” Moore now plans to experiment with a sauce aged in whiskey barrels for six months.

Available from selected branches of SuperValu, independent food stores and online at rebelchilli.com for €5.

Food for body and soul

The Body & Soul festival in Co Westmeath puts high store on sustainability, with its Food on Board catering area serving everything on reusable wooden boards rather than single-use containers.

This year the festival, which takes place on June 21st-23rd, is launching a Veg Village which will be a dedicated area for vegetarian and vegan food. On the menu will be vegan fish and chips from Vish Shop, plant-based burgers from V Face, vegan kebabs from Feashty, and vegan cakes by Buttercream Dream.

Other appetites will be satisfied by offerings from Mexican food stall La Cocina Cuevas, Indian food from Kerala Kitchen, pizzas on the Big Blue Bus, Irish tapas by Grálinn and stacked egg sandwiches by Mad Yolks. Pescatarians can choose from Julia’s Lobster Truck and Shaka Poké.

Now that salads are replacing soup on the lunchtime menu, and sandwiches are being filled with new season tomatoes and garden leaves, this mayonnaise from Ballymaloe Foods might come in handy.

“Mayonnaise is something that all my family are taught to make from a young age, using the Ballymaloe recipe, and we have done our absolute best to create the same tasting product in scale,” says Maxine Hyde, who runs the company, based in Little Island, Cork.

The Ballymaloe mayo was several years in development according to Hyde, who is Myrtle Allen’s granddaughter. It is “made in small batches with extra virgin olive oil, Irish free-range eggs and cracked black pepper,” she says. In Dunnes, SuperValu and Tesco, €2.49 for a 240g jar and €3.89 for a 450ml squeezy bottle.

Could I go a whole year without buying any new clothes?
4