The Wild Honey Inn is the first pub to win in Ireland. All existing star-holders keep their awards 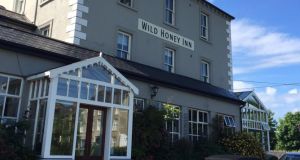 A Co Clare pub has become the first ever pub in Ireland to win a Michelin star, following the unveiling of the Michelin Guide to Great Britain and Ireland 2018 in London this morning.

The Wild Honey Inn in Lisdoonvarna, Co Clare is run by chef Aidan McGrath and his wife, Kate. McGrath has been running the pub for nine years. The Michelin judges say McGrath’s cooking “has a classical French base that delivers on flavour”. McGrath said at the ceremony that the win was down to his classical training while also “fine-tuning things over the year”.

The awards, which are being announced in a live ceremony at The Brewery, near the Barbican, in east London, were a closely guarded secret (following a leak in 2015), with many recipients unsure of whether or not they would retain their stars.

The inclusion of Wild Honey Inn brings to 13 the number of Michelin starred restaurants and pubs on the island of Ireland, two in the north and 11 in the south.

All of the 12 Michelin-starred restaurants retained their awards.

In Dublin, Chapter One, L’Ecrivain, The Greenhouse and Heron & Grey held on to their single-star status, while Restaurant Patrick Guilbaud continues to hold two stars.

One star was also retained by Galway restaurants Aniar, run by Irish Times columnist JP McMahon and Enda McEvoy’s Loam. Kilkenny also held on to two stars, with Gareth Byrne retaining his award for Campagne – which he has held since 2014 – and a star remaining at the Lady Helen restaurant at Mount Juliet Hotel in Thomastown, Co Kilkenny. Further south, House Restaurant at Cliff House Hotel, in Ardmore, Waterford also keeps its star.

First pub in Ireland to be awarded a #MichelinStar - for its robust & confident cooking @WildHoneyInn in County Clare pic.twitter.com/ctFEILyqCg

Expectations that Restaurant Patrick Guilbaud, which has had two stars since 1996, would be elevated to three-star status proved to be unfounded. “That’s life, you have to live with it, move on, and try for next year,” said co-owner and director Patrick Guilbaud, who admitted to being disappointed with the result. “I’d be lying if I said otherwise. I thought it would be fantastic for Dublin, for Ireland, if I could get three Michelin stars.”

He did however suggest that the restaurant being closed for three months for renovations last year, may have had an impact on the outcome. "you have to settle down a little bit again after closing and changing  some of the staff who left because we were closed.”

Michael Ellis, international director of Michelin Guides, said: "I know Patrick,  and we’re following very closely.  Hope springs eternal, I can guarantee you we got back several times every year. I am long overdue a trip to Ireland so I can guarantee I will be there in 2018.”

There was one new three-star announced at Monday’s ceremony, however.  “Today I very happy to say that we have a relatively rare event in the world of Michelin, we have a three star restaurant that we were able to recognise,” Ellis said, before revealing that the fifth restaurant in the UK and Ireland to attain three stars is  The Araki, a nine-seat sushi restaurant in London. Chef Mitsuhiro Araki had three stars for his restaurant in Tokyo before deciding in 2014 to close it and relocate to London “to seek new challenges and deepen his learning”.

Meanwhile, Danni Barry, the 32-year-old chef from Northern Ireland who secured a Michelin star for EIPIC in Belfast for the third year in a row at the awards, has left that restaurant to set up on her own.

“It’s been a weird morning. I finished up at EIPIC last weekend, ” she said, after attending the ceremony in London with EIPIC owner, chef and restaurateur Michael Deane.

She is opening Clenaghan’s restaurant in  the village of Aghalee, outside Moira, in partnership with  Stevie and Cristina Higginson, who own The Square Bistro in Lisburn.

“It’s going to be more relaxed and casual,  a bar menu and a restaurant menu too, with great produce and big flavours. It’s an old stone pub in a 17th century building. Once I saw the building, I knew …” she says of her decision to leave EIPIC, where she has been head chef since March 2014, earning a Michelin star in September 2015. She hopes to have the pub and restaurant open by November.

On Friday, Michelin’s new Bib Gourmand winners, for “good quality at good value” were announced on Twitter and eight of the 27 new additions were restaurants in Ireland.

The 2018 Michelin Guide to Great Britain and Ireland will be on sale from Thursday.