Call this a full Irish breakfast? A plate from hell, more like

When Helen O’Rahilly ordered Irish Ferries’ €12.50 deal, this is what she was served 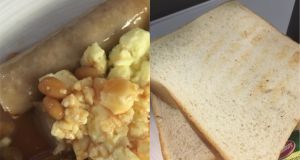 It hadn’t been the best week of my life. A bereavement. A burial. So it was with a heavy heart that I drove on to Irish Ferries’ Dublin Swift at 7am on Sunday, to head home to London, a two-hour voyage over the Irish Sea and then a six-hour drive down the motorways ahead of me.

I’d left home in north Co Dublin at 6am having just had a quick cup of coffee, knowing I’d tuck into a decent breakfast on board. But the portents were not good from the start: the cafe at the terminal in Dublin Port was closed. So no hot tea or coffee. A vending machine offered crisps and Snickers. Hardly breakfast fare. I’d wait until I got on the boat.

To cheer me up after a dire week I handed over €18 extra (on top of the €200 one-way fare) to enter the Trinity club-class section, at the bow of the vessel. I have been a frequent traveller with Irish Ferries for years, and have bought all the fares in all the classes on all its boats. I’d already travelled on this new Swift last year (it replaced the original Jonathan Swift fast ferry), and had admired its modish, asymmetric, inky carpets and its understated beige, navy and grey-toned palette.

What was put down in front of me looked like it had already been eaten and regurgitated: two pale, veiny sausages poked out from a melange of baked beans and something that resembled scrambled egg but looked like curdled milk

For the €18 fee you get a choice of newspapers, unlimited tea and coffee, wine or beer, and a decent array of small dishes, from fresh fruit and yogurt to the rubbery breakfast cheese and meat slices that seem to so appeal to continental Europeans.

When it launched the Dublin Swift, in April last year, Irish Ferries boasted that it had “taken the opportunity to upgrade the range and style of its food and entertainment offerings. With completely redesigned menus, using the very best Irish sourced ingredients from approved and traditional suppliers, there are several different contemporary dining options to choose from.”

I perused a menu from my reclining leather seat. Top of the list was the “Full Irish Breakfast”: two sausages, two slices of bacon, mushrooms, scrambled egg, baked beans, fried tomatoes and slices of black and white pudding.

The whole shebang, plus two slices of toast, was priced at €12.50. It was the perfect carbo-loading gut buster that I needed to prepare me for the long drive home. A helpful, smiling employee took my order; then I made a cup of Barry’s Tea and waited in anticipation.

What was put down in front of me looked like it had already been eaten and regurgitated: two pale, veiny tubes of sausage poked out from under a red-and-yellow melange of baked beans and something that resembled scrambled egg but looked like curdled milk.

The slight roll of the vessel in the Irish Sea accentuated the movement of what appeared to be grey liquid waves undulating under the fatty rinds of beige bacon slices.

Three lumps of squashed tomato had the vinegary taste of tin. As for the mushrooms, they were antediluvian: wrinkled, crinkled and giving off a vague whiff of mouldy sock. There were hash browns too – hard, and oozing oil.

On a side plate lay two slices of white bread masquerading as toast. It looked as if the bread had not actually been put into a toaster but merely been in the same kitchen as one: there was a bare trace of a brief contact with a heated filament on both slices. The pat of Irish butter (I have never eaten butter) was the best part of the presentation. The tea, made by my own fair hand, was lovely.

When I tried to cut off the end of a sausage it skittered off the plate and ended up on that lovely newish carpet. It may have tasted better having been dropped there. Who knows? I certainly wasn’t going to eat it. I just wanted to see what was inside the skin. It wasn’t pretty.

I nibbled at the black and white pudding. Clonakilty. Reassuring. But I doubt Clonakilty would be happy to be associated with the other porcine products on this plate from hell.

Irish Ferries offered me a free upgrade to club class on my next trip – and a full Irish breakfast on the house. Thanks, but next time I’ll bring my own breakfast roll

I left almost all of the grey melange on the plate. I ate a slice of slightly warm, damp “toast”. I closed my eyes and pretended to sleep. I couldn’t even bring myself to explain to the kind waitress why the plate was still full. I paid €12.50 for this nightmarish breakfast plate before I disembarked. I’d lost the will to even complain.

My delayed reaction would be to post my photographs on Twitter, to warn off future travellers from this deceitful version of a full Irish.

Irish Ferries, to be fair, was quick to say sorry – “it appears this is not the appetising standard we would expect from our locally sourced Irish produce when served to our customers, and for this we do sincerely apologise”.

This is the best bit: it offered me a free upgrade to club class on my next trip and, wait for it, a full Irish breakfast on the house. Thanks, Irish Ferries, but next time I’ll bring my own breakfast roll.

Helen O’Rahilly is a television producer, former BBC and RTÉ executive and former editor of Watchdog, the BBC’s consumer series

Calm down covidiots, it’s nothing personal
5 The Brazilian method of keeping a man faithful
6

Is it normal for a woman to fart when she orgasms?
8