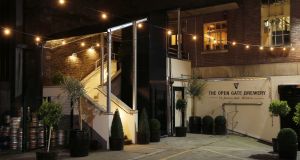 A pub inside the Guinness Brewery shouldn’t be a new idea, but it in fact it is. This isn’t the Storehouse the tourists love to visit, but a new experimental mini- brewery pub further along James Street, behind those famous black gates that take you backstage to possibly the most famous brewery of them all.

Like every beer maker in the world, craft or otherwise, Guinness has realised the huge growing demand for more diverse flavours, strengths and heritage – and it’s giving them a home.

I’m drinking a liquorice stout surrounded by the hum of chat bouncing off the distillery around me. It’s an industrial space, all metal, concrete floors and factory settings, but it works. It only opens two nights a week: Thursday and Friday, from 5.30pm to 10.30pm. You book online and pay €6 for a taster of four beers from their menu.

The staff are excited about their beers. Some of them are brands normally only available overseas, such as Guinness Nitro IPA, or only at the Open Gate, such as the Imperial Dunkelweiss at 8.4 per cent. Behind a locked fence is a cask of barrel beer – ale aged in a Scottish whisky barrel. At week one it’s 6.4 per cent alcohol; by week four, when I get a taste, it’s hit 7.9 per cent.

They don’t sell barrel beer; it’s a random sampler for suitable customers. Chat nicely to the bar staff and you might get a taste.

The Open Gate Brewery will constantly rotate the taps, and some of the experimental flavours that appear once may never return. Staff are ready to engage: there’s a sense that they want to impress you with a very personal experience. It’s a fresh idea from a brand as big as Guinness and its parent Diageo, and one that people will likely respond to.