A micro-brewery and a warm, traditional bar interior have reinvented the old Cock Tavern in Howth, celebrating its lofty position, high over the Irish sea 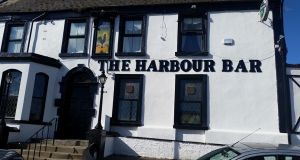 The Harbour Bar on Church Street in Howth

The swing-door, two-person snug that holds centre stage in the Harbour Bar is the first sign that this Howth landmark behind the abbey on Church Street has been reborn. The new owners took what was the Cock Tavern and banished from its interior all signs of its glitzy, disco-themed past, then dug deep into the building’s history to reinvent it.

There’s been a bar on this site since the 1750s, they say, and the new name isn’t really new at all as records show at least one family had a Harbour Bar here over the years. They’re keeping the famous Cock Tavern painting over the door outside. History matters in Howth, says barman Dermot McMorrow.

But it’s a different place for sure: dark wood, small cosy areas to hide away, open fires, exposed brick. It’s a warm, traditional bar that celebrates its lofty position high over the Irish Sea.

Stroll to the back of the bar and you’ll see that it’s a craft beer house too, with its own micro-brewery, a first for the peninsula, with three 1,000-litre kettles on show behind glass, feeding directly to the taps at the bar.

They carry lots of craft beer labels also from home and abroad as well as Guinness and Heineken. There are plans to open a restaurant kitchen on site although they’re serving great chowder and stew already and fresh pastries from Howth market sit ready on the bar.

Come July they aim to have their first gin distilled on site, infused with the fragrant flavour of Howth heather, picked from the hill behind them.

It’s an ambitious transformation, but as musicians set up in the corner and locals stroll in and smile, there’s a feeling that it just might succeed and that tradition is glad to be home again on Church Street.

The most exciting Irish restaurant, from a young team, in years
3