Stuffed with fun and atmosphere, this is easily one of the best craft beer houses in the city 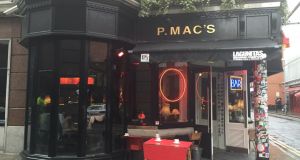 This is a fine gastro pub, slightly more up-market than its sister pub Cassidy’s on Westmoreland Street

It’s important we pause now and again to appreciate how great the Dublin bar scene has become. It seems like only weeks ago that five identical taps lined every bar and decor swung lazily between traditional pub and ultra-modern wine bar, with little in between.

Now, here I am at the bar in P Macs, staring down 30 taps, each one pouring a more exciting Irish or international beer than the last. I was tipped off that White Gypsy has Ruby Red on tap here, a lovely creamy ale that pours almost like stout and hails from Tipperary.

What a great home it has found in Dublin: P Macs, on the corner of Digges Lane and Stephen Street Lr in Dublin 2, is stuffed with fun and atmosphere and can match the best craft beer houses in the city (and unlike most, it has Guinness on tap too). I like it best in daytime, when it’s not packed to the gills and the board games, quirky lighting and big dining tables that carry the place get full rein.

There are three great snugs lined up like confession boxes, where comfy seats and Space Invader tables battle for supremacy. Follow the curve of the bar and you’ll find another hidden space hiding a piano and a slice of privacy while candlelight throws shadows around the room. This is a fine gastro pub, slightly more up-market than its sister pub Cassidy’s on Westmoreland Street and handsome older brother to the Blackbird in Rathmines.

Paul McNulty is one of the people behind P Mac's, a team that in a few short years has helped bring a fine new stable of venues to the capital. They’ve recently opened their latest venture, Columbia, in Mullingar, and, with luck, they’ll employ the same witty style that helps P Macs suit Dublin so perfectly.