No 8: Family establishment still going strong with eighth generation behind the bar 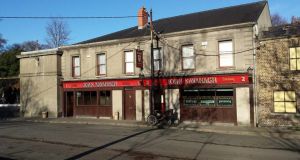 There are two sides to Kavanagh’s: the beautiful public bar that remains firmly rooted in its past and the lounge next door with its great food

Robert Kavanagh (22), the eighth generation of his family to work this remarkable pub in Glasnevin, pulls my pint. His uncle Ciarán, (seventh generation) joins us and then, like a force of nature, Robert’s grandfather Eugene, the sixth generation and the powerhouse behind this pub that locals call the Gravediggers.

Family histories flow: tales of achievements, marriages, sadness and joy – lives filled to the brim with experience and drama.

There is such good humour at the heart of this place that it is hard to imagine the solid determination that must have been needed to marshal it so successfully into the 21st century.

Eugene (76) has never taken a drink or smoked. He has run 170 marathons, climbed mountains and, by his own admission, faced down every challenge that’s ever come his way. His pride in his life’s work is infectious and, if you give him the time, he will bring you through a history of Dublin and Kavanagh’s role in it that will astound you.

There are two sides to Kavanagh’s: the beautiful public bar that remains firmly rooted in its past and the lounge next door with its great food, selected and managed by Ciarán, that keeps the future firmly in its sights.

Celebrity fans and film crews are common, but it’s the locals that lead the charge. The first I meet is Bisto, a gravedigger himself and a man who delights in bringing strangers down to earth. A cheery gang of locals are quick to upstage him though, chiming in with punchlines and laughter spreads. It is a rabble of personality that, for the visitor, captures the essence of Dublin in an instant. Call in and apply to join them soon – it only takes a lifetime to achieve.