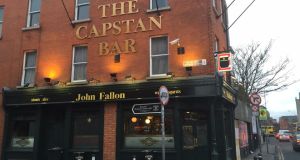 There’s been a bar at the site of Fallon’s since the 1600s but, by the turn of that century, the Liberties was a scene of abject poverty and many families have fought hard to keep it alive since.

There were once five bars standing at the four corners of hell, the junction that stands as the gateway to the Liberties and the Coombe in Dublin. Kennys, Quinn’s, O’Beirne’s and Lowe’s each held a corner of this infamous junction in the shadow of St Patrick’s Cathedral while Fallon’s stood watch on the sidelines.

Development, road widening and what some call progress have seen off each of the first four, leaving John Fallon’s Capstan Bar to hold the fort alone. When it was put on the market in 2015 there was a fear that even this stalwart would fall, but the new landlord, Conor Linnane, had other ideas. If he makes any changes, he says, you won’t notice them, except perhaps your seat will be more comfortable or the toilets a little fresher. Linnane is also the owner of the Dawson Lounge, Ireland’s smallest bar, so he knows the value of protecting tradition.

Dave Lee has worked behind the bar for 25 years and talks with fondness about the Capstan and its customers – the famous faces and the great atmosphere generated by the stove, the heavy dark wood and the snug that will hold you for the night, and the simple joy of working at the heart of a Dublin landmark.

There’s been a bar here since the 1600s but, by the turn of that century, the Liberties was a scene of abject poverty and many families have fought hard to keep it alive since. The building, which was rebuilt in 1911 after a fire, has witnessed much drama and harboured many a secret meeting. The female volunteers of 1916 are reputed to have met here to plan their role in the Rising. It’s popular with tourists en route to the nearby Teeling Whiskey Distillery, which has recently charged the area with new life that should help see The Capstan Bar write its next chapter.