Amid backlash and rising prices, the avocado craze continues

Ireland can’t get enough of the avocado, but there’s a sinister side to the food trend 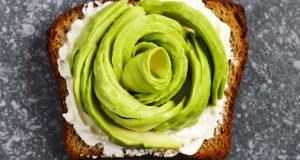 The “avocado rose”. This fad has people cutting their avocados into thin slices, fanning out the slices so that they all overlap and then curling the slices towards the centre in imitation of a rose

It’s fitting that an Irishman – the naturalist Sir Hans Sloane – gave us the word “avocado”, when he was cataloguing Jamaican plants in 1696. For it seems that Irish people can’t get enough of the fruit.

It was the fastest-growing food or drink trend here in 2016, and you can’t move on social media without some “personality” offering up to the Instagram gods a photograph of their smashed avocado on toast.

Glossing over the fact that “avocado” comes from an Aztec word that can also be slang for “testicle”, the fruit’s boastful health properties and trendy status have made it a shopping staple for Irish people – who until a decades or two ago defined salad as a tomato on top of two leaves of lettuce.

In Brooklyn (where else?) the world’s first “avocaderia” has just opened. Avocaderia is a restaurant that uses the fruit in every dish – perfect for hipsters who prefer to sit on upturned milk crates, sup their drink from a jam jar and wring their hands about organic farming, fair trade and provenance when they go out to eat.

The Brooklyn avocado bar is Monty Python’s classic Spam sketch given a reverse reboot for millennials.

And now that slices of avocado are sneaking into every sandwich and cafe dish created, a resistance is forming. The staff at the Firedog restaurant in London are mad as hell and are not going to take it any more. They’ve just brought in a zero-avocado policy.

Its head chef, George Notley, told independent.co.uk, “The morning dining scene in London has done avocados to death, and we’re frankly bored of seeing it on every breakfast and brunch menu. You can create a colourful menu rich in interesting flavours and fresh ingredients – and all without an avocado in sight.”

In Australia a minor national debate ensued after a newspaper columnist, Bernard Salt, wondered why young people were spending so much on avocado-themed breakfasts when they could be saving up for a mortgage.

“I have seen young people order smashed avocado with crumbled feta on five-grain toasted bread at $22” – that’s €15 – “a pop and more,” he wrote. “How can young people afford to eat like this? Twenty-two dollars several times a week could go towards a deposit on a house.”

The irresistible rise of the avocado (people in Ireland now buy them more than they do apples or oranges) is a marketing triumph. Trading on its historical status as an “aristocratic” fruit, the avocado hitched a ride on the #eatclean movement and went after the “upscale” consumer (typically college educated and health conscious).

By hammering home its health benefits and emphasising its fashionability, the avocado elbowed its way to the top of the nutritionally correct queue, shoving blueberries and goji berries out of the way with a full-force hashtag campaign.

And is it really as cancer-reducing, heart-attack-preventing healthy as its advocates claim? While avocados are very good for you, so are other, less expensive, less on-trend fruits.

The danger with nutritional fads such as the avocado craze is that, blinded by hype, people view them as a magic-bullet solution, as if they can continue to eat processed food as long as they throw in a few avocados. They can’t – no matter how many photographs they take.

The already expensive fruit is likely to rise steeply in price in the coming months. The unprecedented surge in demand and a smaller crop being produced in Mexico, one of the world’s most important avocado producers, means the wholesale price of the fruit has doubled in just 12 months.

There are also stories of Mexican drug cartels adding the avocado to their narcotics businesses. Groups such as the vicious Knights Templar – attracted by high demand and large profits – are muscling in on production and distribution of the fruit, and extorting local peasant farmers.

Although not all of Ireland’s avocados come from this region – Kenya and Israel are also major exporters to Europe – the West’s fixations with hip food do not always benefit indigenous farming communities. Think about that as you ingest your testicle fruit this morning.