Alison O’Reilly: My week in the BBC MasterChef kitchen 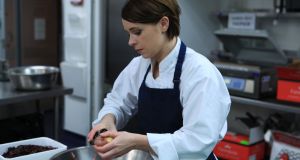 Dubliner Alison O’Reilly in action in the BBC MasterChef kitchen

Alison O’Reilly, the 30-year-old from Dublin who has reached the semi-finals of the BBC MasterChef cooking competition, presented one of the two best dishes in Thursday night’s fish cooking challenge – the second time this week she has been at the head of the field – and has gone straight through to Friday night’s Critic’s Table challenge.

Public relations copywriter Lorna Robertson also received a fast-pass, despite breaking down in tears while cooking her fish tacos, and being sent on a “bathroom break” by judge John Torode to recover her composure.

The remaining five contestants had to take part in an elimination invention test in which Northern-Ireland-born wine marketing consultant Jamie Patterson’s strawberry shortcake dessert did not make the grade, and he was shown the door.

O’Reilly and Robertson will be joined in Friday night’s last semi-final challenge by sound engineer and drummer Steve Kielty, musician Giovanna Ryan, store designer Brodie Williams and doctor Saliha Mahmood-Ahmed. The six will cook for food critics Jay Rayner, Tracey MacLeod, William Sitwell and Amol Rajan. In this episode, to be screened at 8.30pm on BBC One, a place in finals week is at stake.

More than 25,000 amateur cooks applied to take part in the 13th MasterChef series, and London-based marketing consultant Alison O’Reilly is among the favourites to take the title. She shone in this week’s challenges, twice cooking the star dish of the round.

On Wednesday, the finalists were divided into two teams of four and cooked for 120 members of the cast and crew of the TV series Holby City at Elstree Studios. O’Reilly was not on the team that received immunity after this task.

However, in the elimination task that followed, she cooked one of the best dishes of the series so far, according to John Torode. Faced with making a dish out of the leftovers from the Holby City task, O’Reilly made a fancy open sandwich with fried fish that Torode said was something he’d “never seen on MasterChef before”.

On Thursday, the finalists were on location at Billingsgate fish market, and cooked lunch for a panel of fish industry experts. O’Reilly again impressed, with her dish of pollock and clams, with courgette ribbons, seaweed gnocchi, red pepper sauce and basil oil.

Speaking to The Irish Times, she outlined her week so far in the MasterChef Kitchen, ahead of Friday night’s semi-final finale:

“Cooking for the cast of Holby City was definitely the toughest challenge we have faced so far in the competition – not just in terms of the scale of the task and the challenge of having to feed that many people, but also in terms of being split into separate groups and knowing that the loosing team would face an invention test.

“Having said that, I was delighted when I was grouped with Brodie, Giovanna and Faye – we all get on so well and I thought we worked well as a team. Unfortunately a few timing issues on the day meant it didn’t go our way. But I learnt more from that challenge than anything else so far in the competition, and looking back, I’m really proud of what we achieved.

“For the elimination invention test that followed, this time I kept it simple and cooked food I truly love, just as I would of done at home if I had a few fish leftovers. The comments from the judges were amazing – when you know they have totally got the point of what you were trying to do, it’s the best feeling in the world.

“Fishmongers’ Hall on Thursday night was such a fun challenge. Fish is one of my favourite things to cook with and being able to take over the kitchen and serve a fish dinner there was an absolute privilege.

“My intention with this challenge was to take a humble fish like pollock and really lift it with bold and exciting flavours. The seaweed gnocchi was soft and savoury, the red pepper purée was light and sweet, and the salad of courgette and basil gave freshness and acidity.

“Having said that, I think what everyone was looking out for was whether the fish was cooked perfectly. I made sure that I focused on this first and foremost and in the end I think that is what got me through to the next round safely.

“In challenges like this one, you really have no idea how your dish has stacked up against others, or whether they even liked it at all. Going back into the MasterChef kitchen ready for another invention and to hear my name called first was such a massive relief. I was totally blown away that such experienced guests and chefs had picked my dish as one of the favourites – truly a highlight of the competition.

“Fish is a big deal in my family home and something, particularly as an Irish person, I pride myself on cooking well. I wanted to do myself and those who know me proud and cook each piece of fish perfectly – and I think I did that.”