A fish sandwich with a fruity twist

Other than fish fingers, what have we against putting fish in between two slices of white sliced bread? 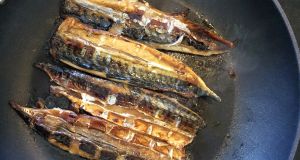 When making a grilled mackerel sandwich, Make sure the fish fillet is pin-boned and cooked on the skin side only, until blistered.

The combination of fish and gooseberries is not a new one, but there are times when we seem to  question the pairing of fish and fruit. Of course, there are those among us who know that fatty fish, such as salmon, trout and mackerel, sit nicely alongside different fruits such as cucumber, tomatoes, redcurrants and gooseberries.

One of the earliest references to mackerel and gooseberries that I came across dates back to 1778 in Charlotte Mason’s The Lady’s Assistant. Mason’s book is a comprehensive source of late 18th century recipes that influenced many an Irish house, especially those that were landed, or were in the know. Aside from her gooseberry and fennel sauce (that works so well with mackerel), her book also contains some of the earliest recipes for sandwiches.

It may be taking it too far to suggest a sandwich of mackerel with that sauce, but I’m sure the Japanese would not baulk at the sight. Their combination of fish and sweet fruit sauces between slices of puffed white bread takes the idea of a sandwich to the next level.

Other than fish fingers, what have we against putting fish in between two slices of white sliced bread? I know you may shout from the aisles that the tuna sandwich is alive and well in every petrol station in Ireland, but I don’t know if this would qualify under my terms of what a good fish sandwich is, or can be.

All those beautiful things we do with fish for dinner, we could equally do for a quick sandwich at lunch.

How to make the best grilled mackerel sandwiches

Make sure your mackerel fillet is pin-boned and grilled on the skin side only, until nice and blistered.

Season well with salt and place between two judiciously buttered slices of your best white bread.

If you have  gooseberry sauce to hand, spread a little on the flesh side of the mackerel before serving.